Since our last post we have taken the RV out once, again to Champoeg State Park, mostly because that is the closest park to our house. I didn’t write anything about that trip because it was pouring rain the entire time and we hardly even left the RV. Not exactly inspiring.

But I am definitely not complaining. After all, all of our work and waiting is in preparation for something awesome. And even when it seems far away, I know we will be on the road very soon. I just noticed the other day that my countdown clock had made it to double digits! 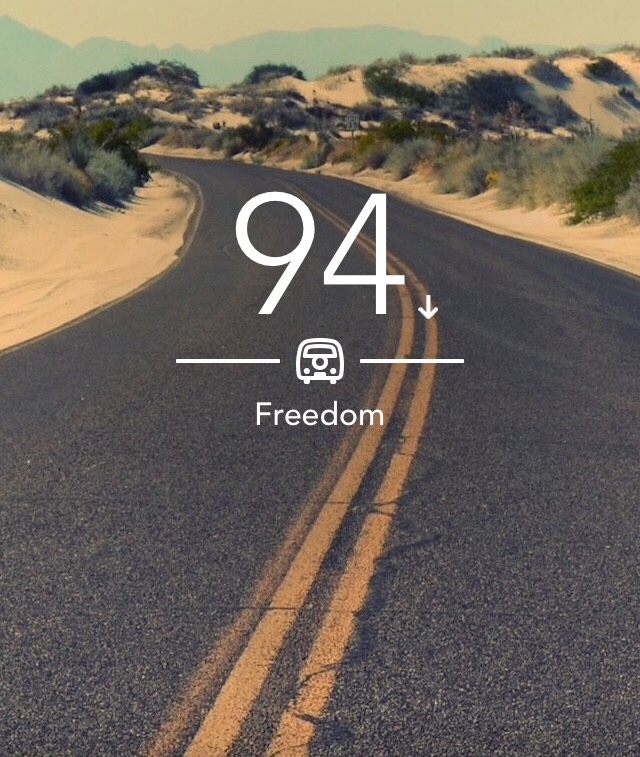 Our lack of big weekend plans has also given us time to tackle some of the projects that need to be completed before we leave. One of these projects was getting our Jeep “Adventure Worthy”.

We decided on a Jeep for our tow vehicle because they are light-weight and easy to tow but can also go just about anywhere. With the Jeep we can get to many of the amazing campsites and views that we just can’t access in a 37 foot bus. Jeeps are also just a whole lot of fun.

Our Jeep is a 2003 TJ Wrangler which we have named Gunner. To get it trip ready we added a 3 1/2 inch suspension lift, 33 by 12 inch tires, and a spare tire-carrier with an extra gas can (just in case). We will be adding a roof rack soon. We have also become involved with a local Jeep club called Jeep Nation. It is a great group of Jeep enthusiasts who like to go out on organized trail rides. Apparently Oregon is chock full of trails to take your Jeep off-road. These guys also have a wealth of knowledge and advice that has been very helpful to Brandon while he has been making small tweaks and repairs to the Jeep. Brandon found the group on Facebook and up until last weekend had only communicated with them online.

This past weekend we finally had the chance to get out and join the group on one of their trail runs. I had never done anything quite like this before so it was really exciting. I was incredibly nervous at first, but by the end of the day I was happily munching on a bag of potato chips while we drove down the side of the mountain. Of course, Brandon had a blast the entire time. 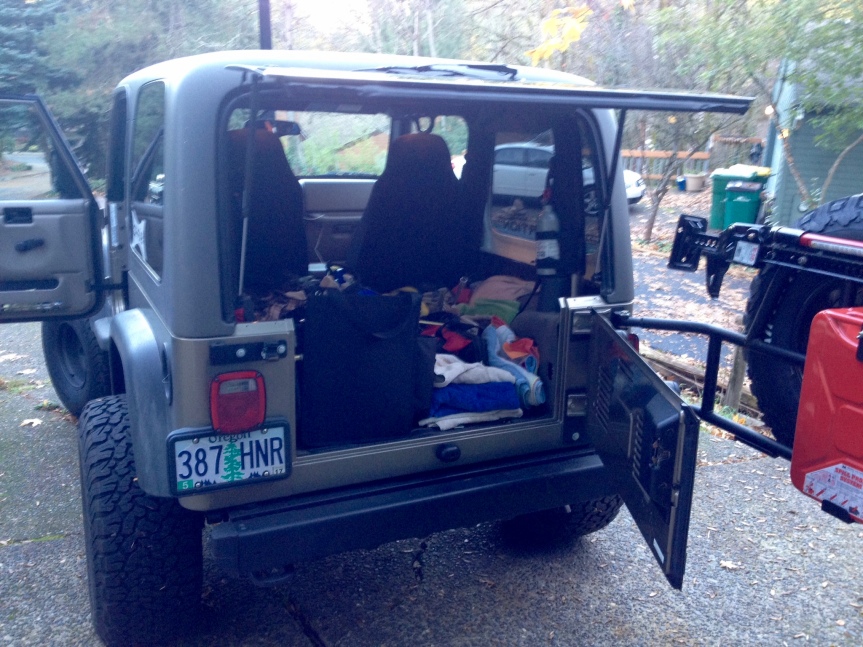 Although he wasn’t a Boy Scout, Brandon is always prepared. 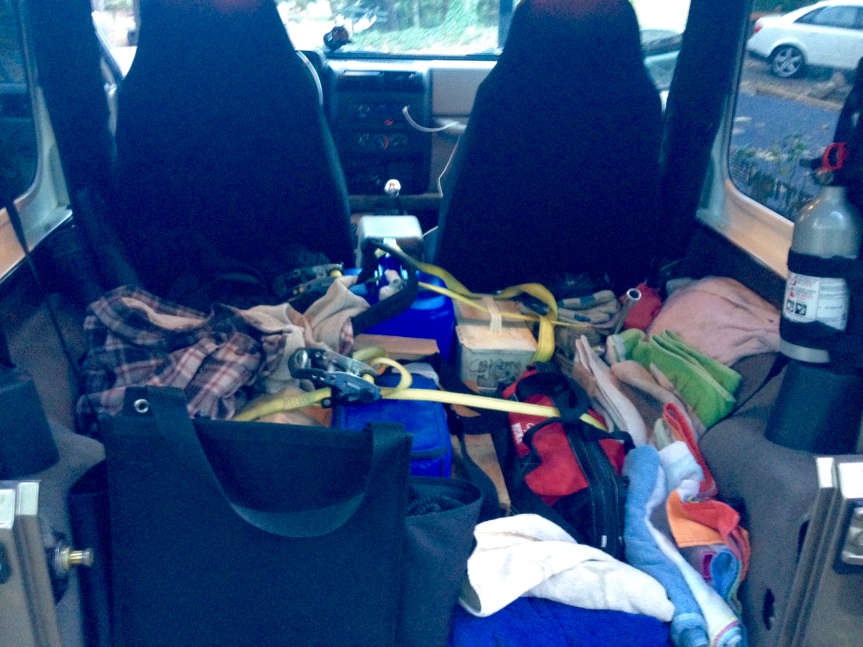 The run was organized as a birthday celebration for a member named Becky. As you can see from the photos below, there was quite a turn out. We were at a place called Brown’s Camp in the Tillamook Forest, an area of wilderness, off-road trails, and camping spaces maintained by the Oregon Forest Service. 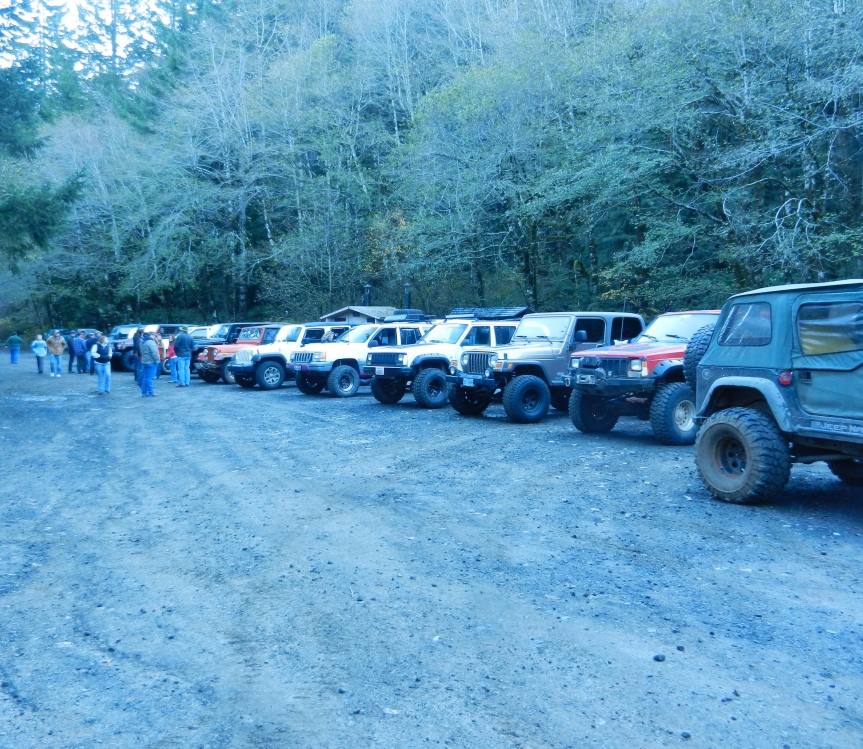 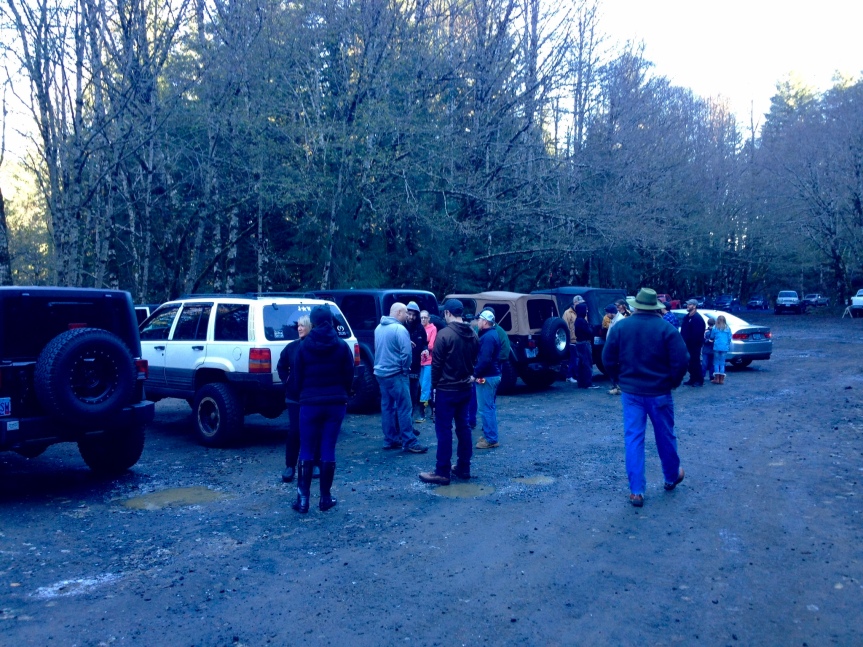 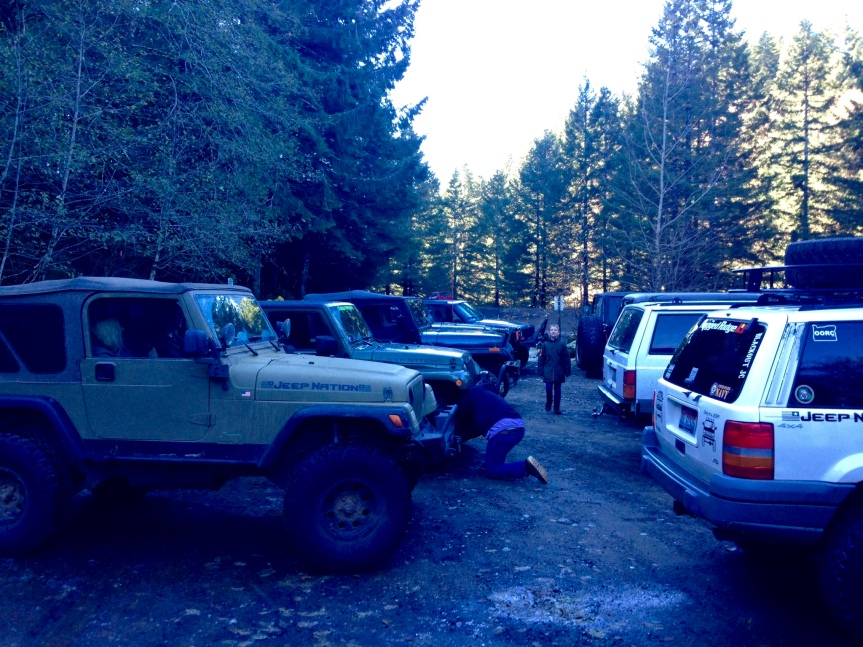 Once everyone was ready to go, we divided into three groups: Easy, Moderate, and Difficult. We went with the moderate group after a friend  who knew the trails well suggested that our Jeep was equipped to handle it. Below you can see Brandon airing down the tires. Before you drive off-road you reduce your tire pressure significantly so that your tires are more pliable with more traction and less likely to pop. More on that later.

Everyone in the group drives in a single-file line with a more experienced leader at the front. There are over 130 miles of trails in the forest so a leader that knows the area is essential. The leader also goes over all of the obstacles first and generally gets out of his vehicle afterward to guide everyone else so that we all make it through safely. 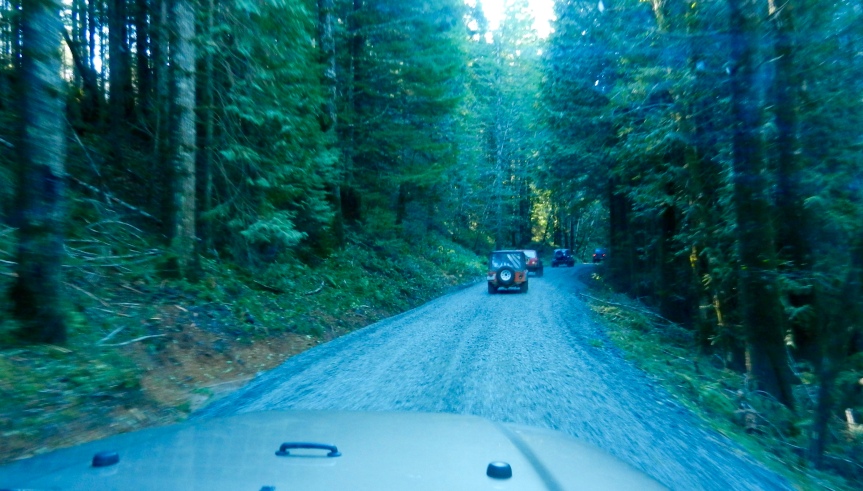 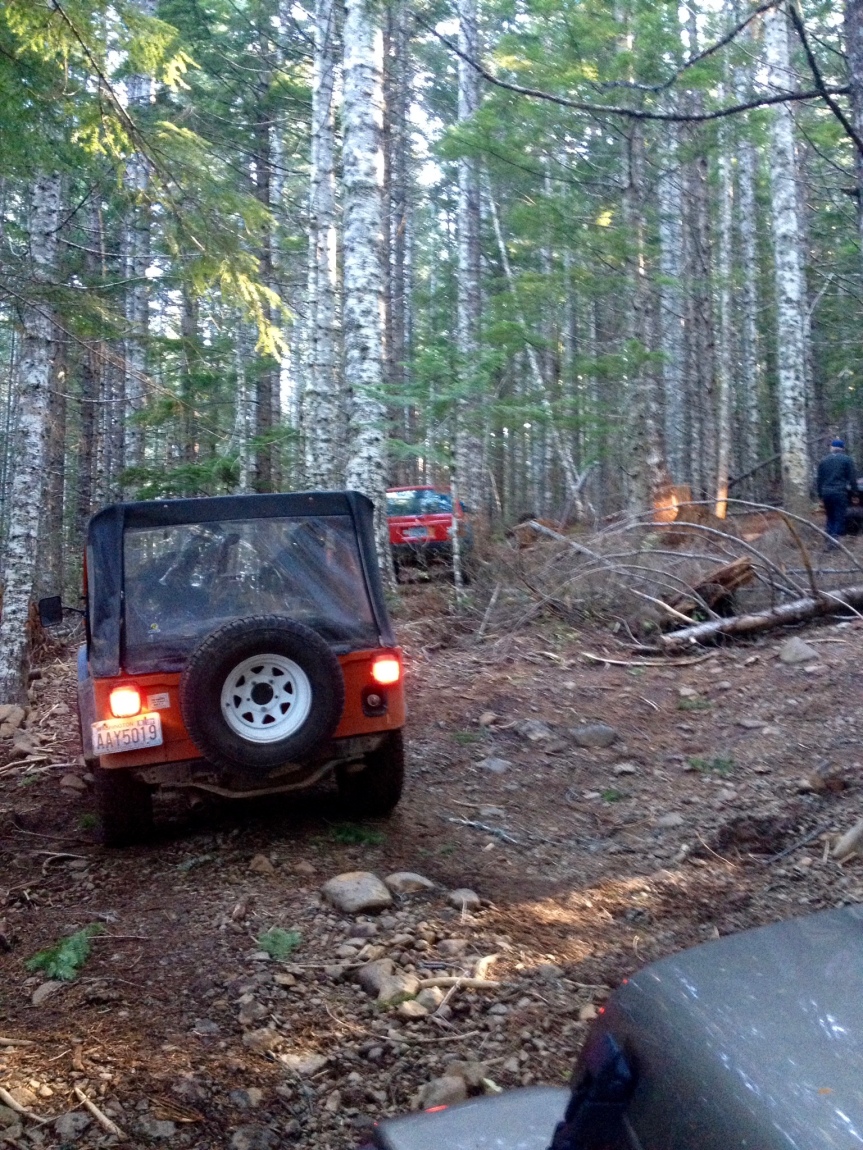 Here you can see Brandon going over the first big obstacle, a section of the trail known as Fire Break 5.

Things were going really well until Brandon’s back tire encountered a sharp rock hidden behind a boulder. The rock completely slashed the tire and it went flat immediately. Luckily, we were totally prepared for this type of thing. We had a spare tire and another guy in our group had a brand new jack that he had been wanting to test out. They had the tire changed in about ten minutes. Even more amazing, the tire is completely covered by the tire warranty. The automotive shop where we bought the tires specializes in 4-wheel drive vehicles and off-road equipment and warranties their tires for this exact type of damage!

With the new tire in place Brandon made it to the top of the hill with no problem. We also learned that we probably did not have our tires aired down quite enough, which may have been why the tire popped. For highway driving the tires are around 32 PSI. We aired ours down to 20 PSI before hitting the trail. After the tire popped we aired all the tires down to 12 PSI and had a much smoother ride and no more flat tires. Lesson learned.

We passed by the group that was on the Difficult trail and saw this guy high centered on a boulder. He didn’t seem fazed at all and was still having a great time. And he did eventually manage to get off that rock. Brandon told me that he is a bit of a Jeep guru in the community and does a lot of custom mechanical projects for people.

Back in line and on our way up the mountain.

We did not go over this particular part of the trail. We took the bypass that was also covered in rocks, just slightly smaller. 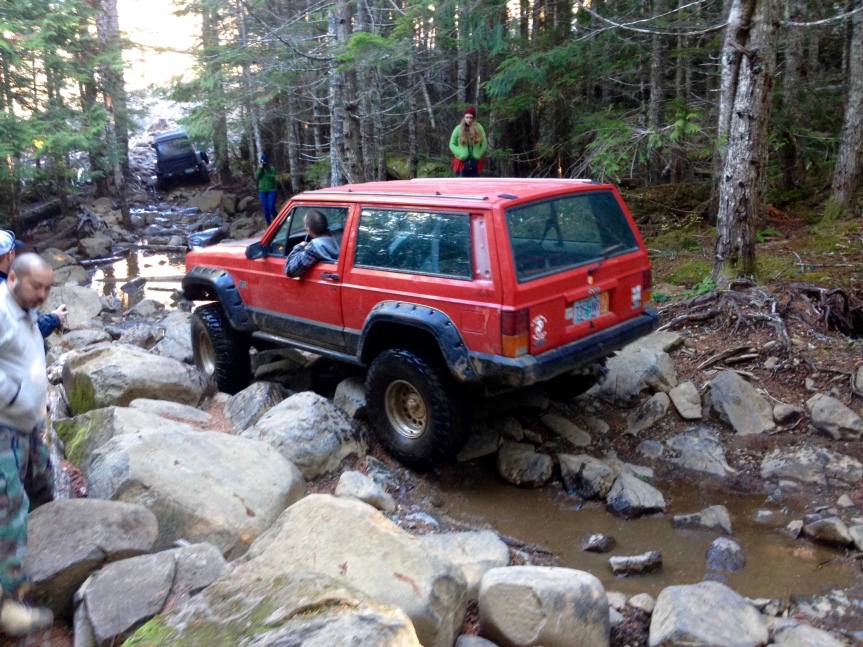 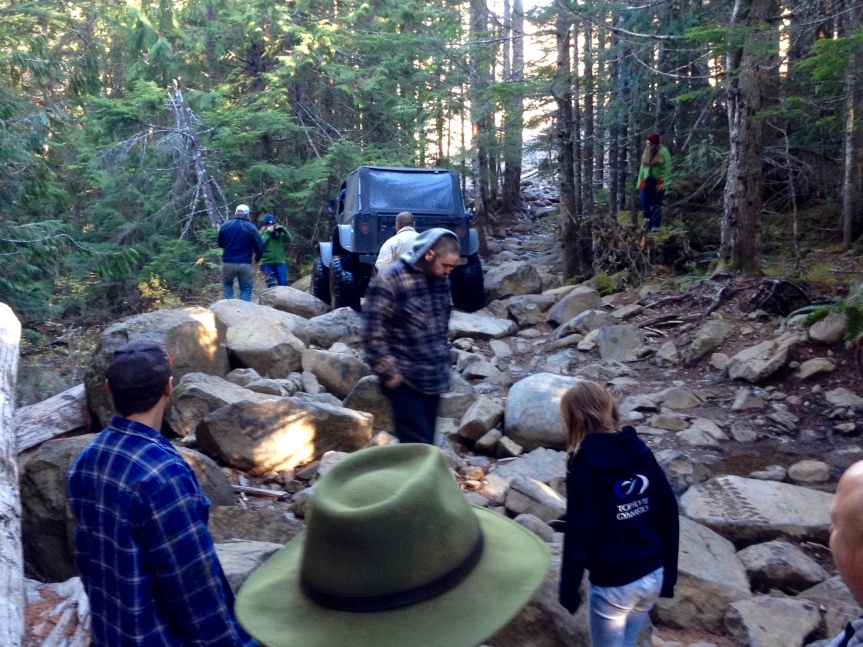 Lunch break at the top. 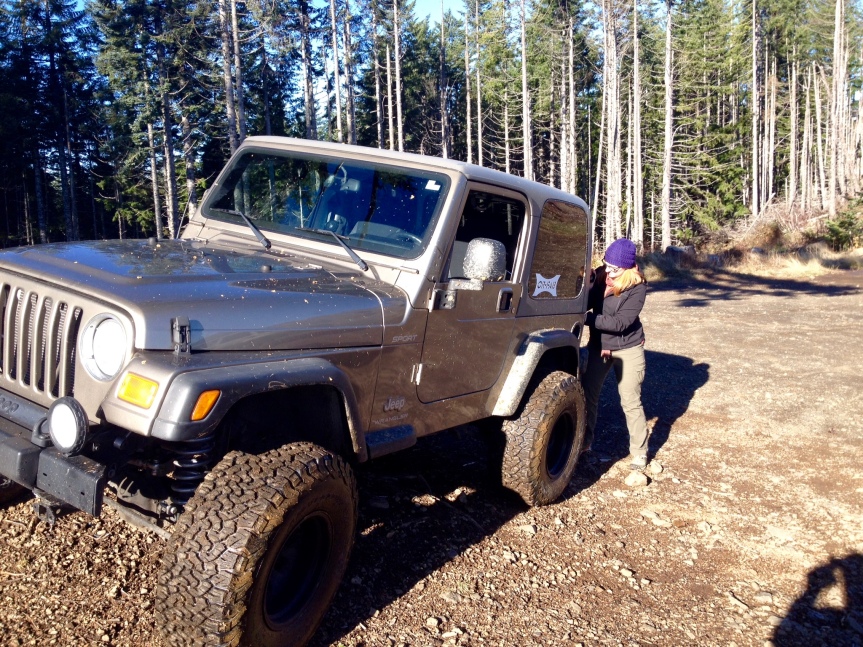 The view from the top was incredible. I had a hard time believing that we actually drove here! This also reaffirmed why we wanted a Jeep as our tow vehicle. While we would be unlikely to go on a trail of this magnitude without a good guide and other people to assist us in a pinch, there are many other beautiful places like this that are only accessible in a off-road capable vehicle. We would miss out on some of that if we had decided to tow a Prius.

At this point, all the anxiety I had been experiencing earlier in the day was gone. I was quite literally eating a bag of chips while we drove our Jeep on top of a mountain. No worries at all. 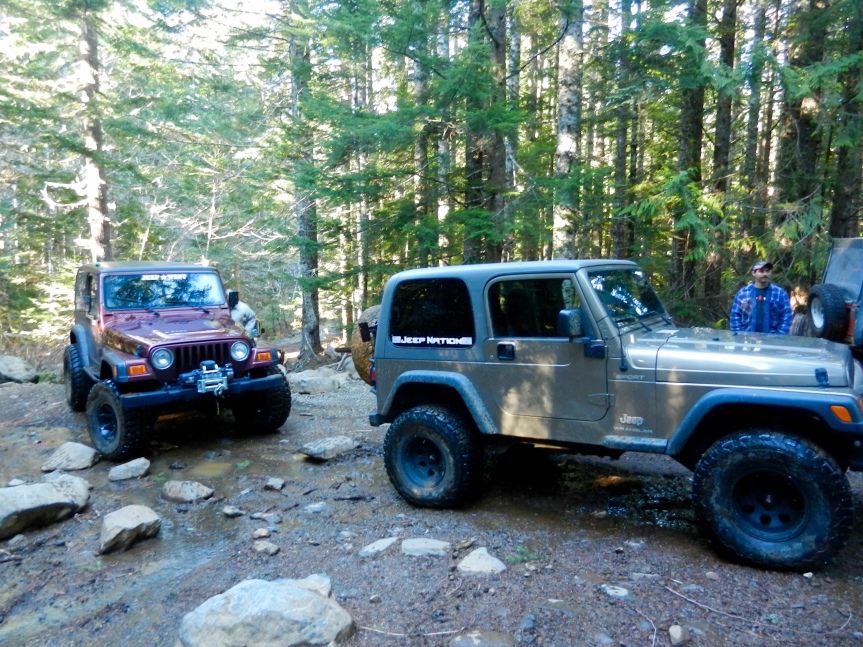 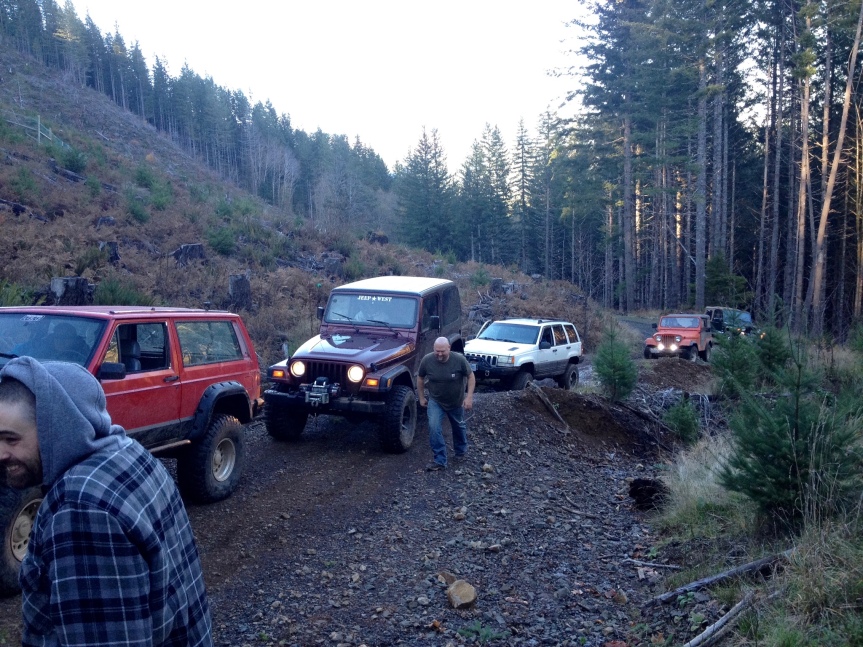 As much pride as Brandon takes in keeping the Jeep clean and pristine as his daily driver, he took just as much pride in seeing it muddy and filthy after a day on the trails. 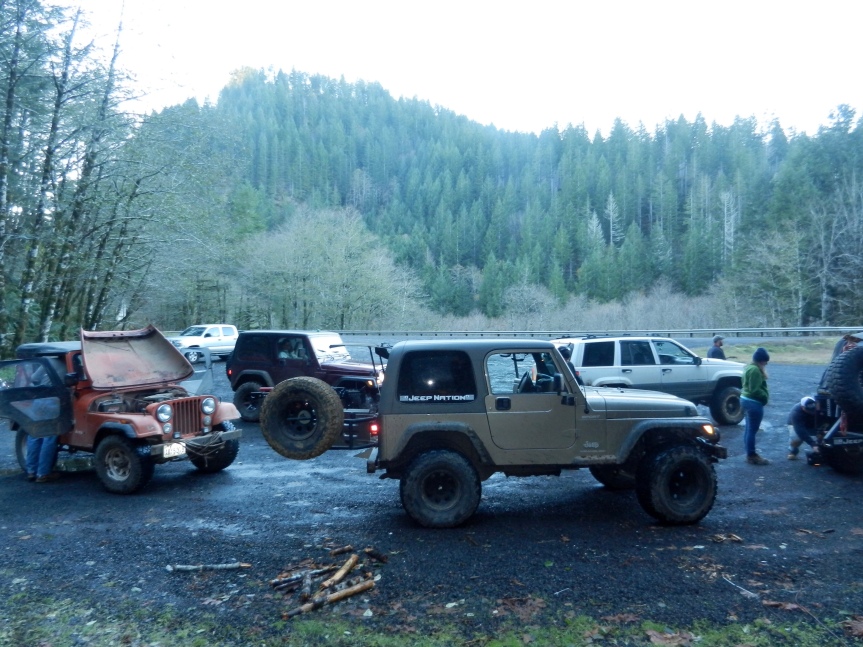 Did I mention that there was a waterfall at the end of the trail? Oregon is seriously an incredible state full of incredible places.

After everyone got their tires aired back up to highway pressure, we all went out for pizza and beer and a local pizza place. It was a perfect way to end the day. We had a ton of fun and made some great new friends.

Because Brandon was doing all the driving, I tried to capture as much of the day as I could in pictures and video. Filming from inside a Jeep while going down a bumpy trail is a bit of a challenge, but I was still able to come up with some good material. I ended up with a number of shorter clips (and some that were way too long) so I tried my hand at video editing for the first time. Enjoy!