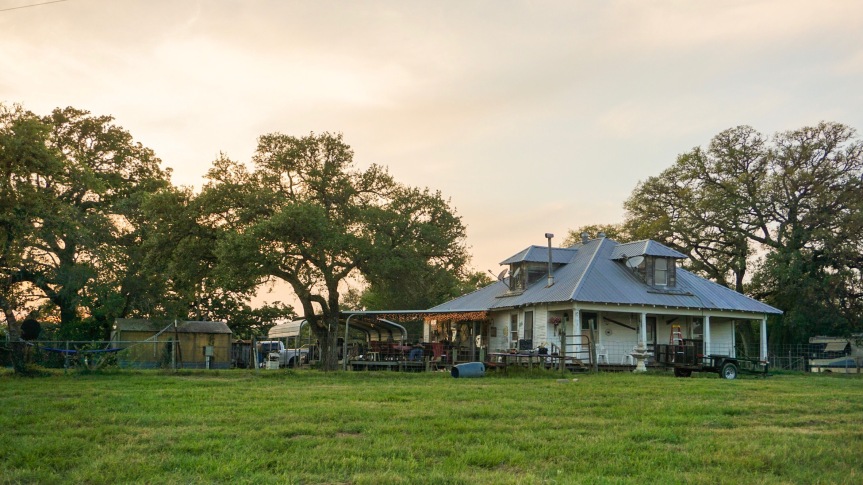 This is not a typical Alpha1 blog post. We don’t have any major life updates and we didn’t go on some crazy adventure. Rather, we did something quite ordinary. We had Brandon’s family over for an Easter BBQ at the family ranch where we’ve been staying. And because this is Texas, that means shooting guns, riding 4-wheelers, and feeding the cows. Of course, we didn’t nix all tradition. There was also a raucous confetti egg fight and a brown sugar and bourbon glazed ham (which we smoked on the bbq pit because, well, Texas).

Note to Friends & Family: Feel free to save any of these photos directly from the blog. These are all full-resolution images suitable for printing.

Note to anyone I don’t know that would like to save these photos:  You are an odd bird. I don’t know you and these are our personal family photos. I understand that I have put them up on the internet where everything feels like free game, but still, please don’t. Saving someone else’s family photos is weird. Don’t be weird. If you’re still confused please consult the copyright and use notice on the homepage. Thanks!

The blue 4-wheeler is the newest addition to Brandon’s collection of off-road vehicles. He swears it’s not a toy. It’s a useful piece of equipment and we’re going to get a lot of work done with this thing. I want to believe him, but he sure seems to be having a lot of fun.

Everyone had to lean over so Alex could bust a confetti egg on their head. 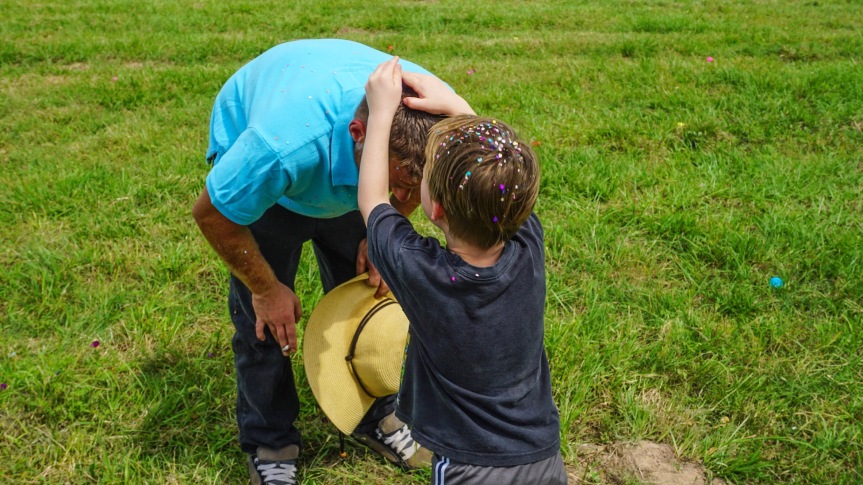 Even Rudy got in on the action!

We had a special guest at the bbq, a friend of Brandon’s grandma who came all the way from Denmark to visit Texas and have the “cowboy” experience. The day before, they went to a dude ranch in Bandera, where they rode horses and learned to use a lasso. He told me he’s “licensed cowboy” now! Birger (pronounced BeeWaa) had also never been to an Easter celebration, ridden a 4-wheeler, shot a gun, or fed a cow. It was a big day of firsts! 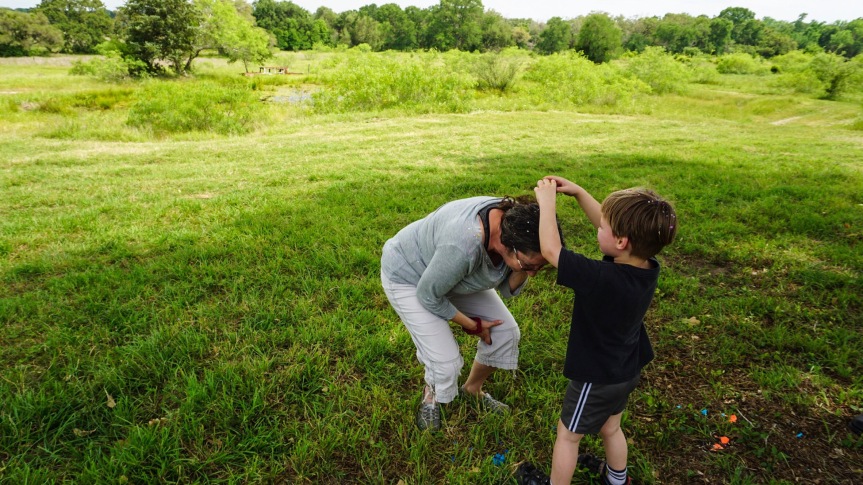 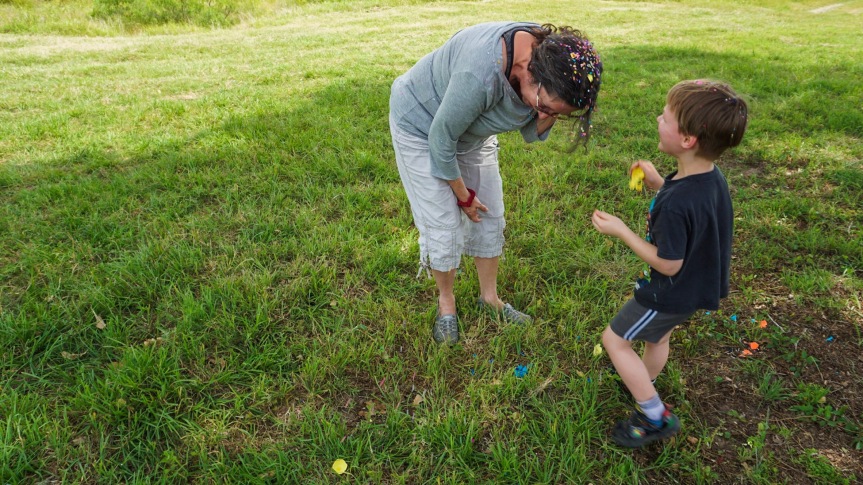 Sneak attack! Leah thought she was in the “safe zone”. 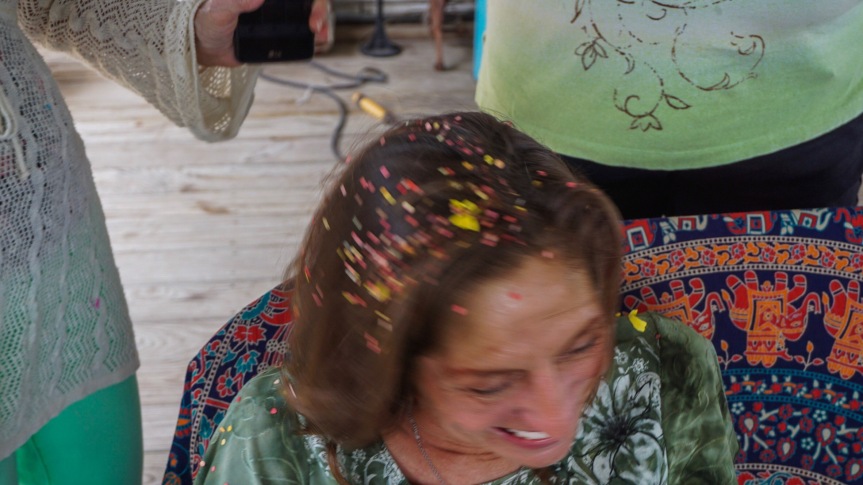 I think Rudy believes he can use the force. If he just stares intently enough your fingers might slip and a tender morsel will fall to the floor.

All three brothers in one place at one time. They all look a bit suspicious but their mom was thrilled.

And of course, the group shot! This is our “normal” photo. We really tried. I swear.

This was our “ninja” photo. Obviously, the directions were open to interpretation.

Alex had a great time riding the 4-wheeler and he picked up on the mechanics of driving very quickly. I took him for a ride later and without being prompted he turned the key, pressed the ignition button, and went for the throttle! Luckily, he’s not actually strong enough to put it in gear! 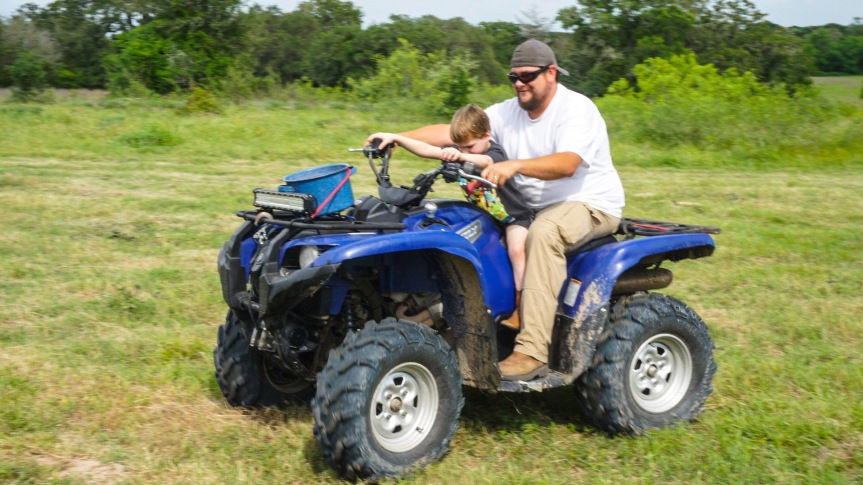 Carla made an adorable “dirt cake” for the party. It had layers of chocolate cake, pudding, peanut butter crumble, and hidden gummy worms. The chocolate covered strawberries on top were supposed to be carrots but she didn’t have the proper food coloring for chocolate. Turnips it is!

Alex got his own personal dirt cake. 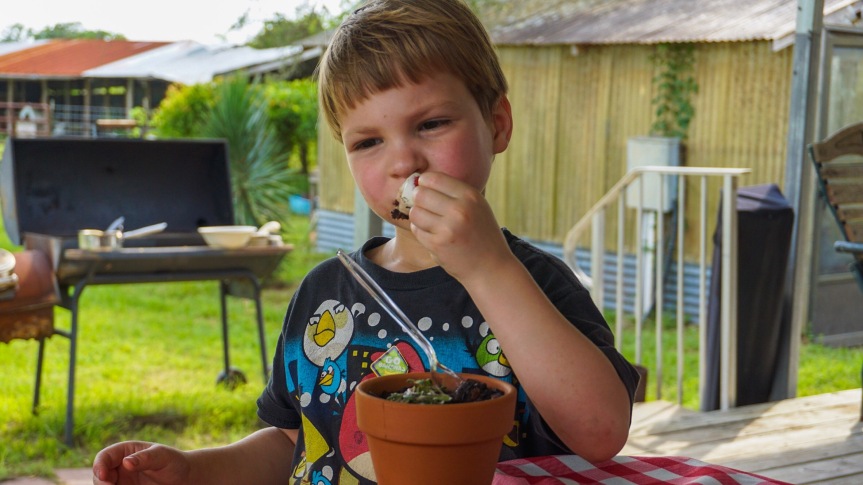 You can’t take this kid anywhere.

For the past few weeks I’ve been working on befriending our resident cattle herd. In just the last couple of days I’ve made major progress. They now eat right out of your hand and come when called (more or less). The video below is from a few days ago, the first day I successfully fed them by hand.

I’d been hoping all day that the cows would make an appearance. By late afternoon we still hadn’t seen them so I went looking for them on the 4-wheeler. I found them in a far corner of the property, fed them a few treats, and they followed me back to the house! 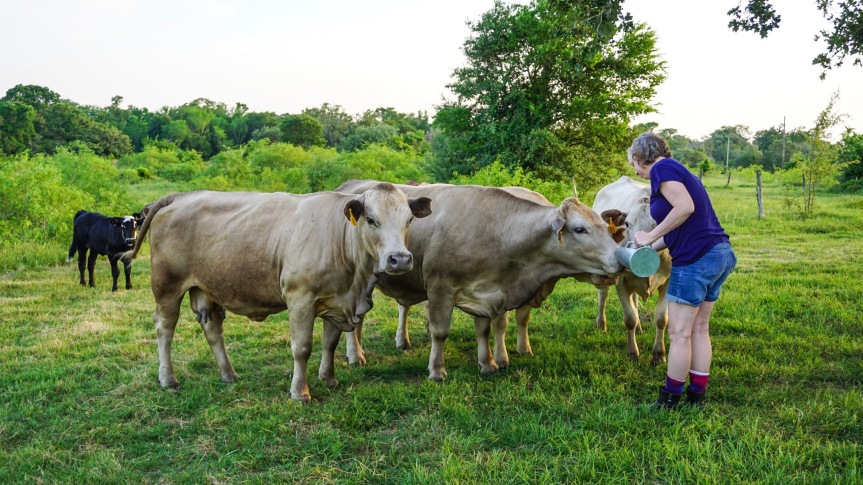 Most of these girls are pregnant and always hungry! 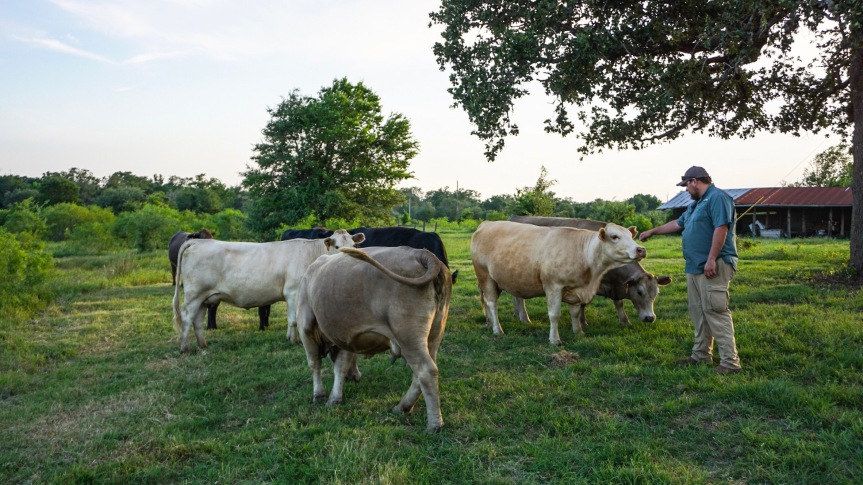 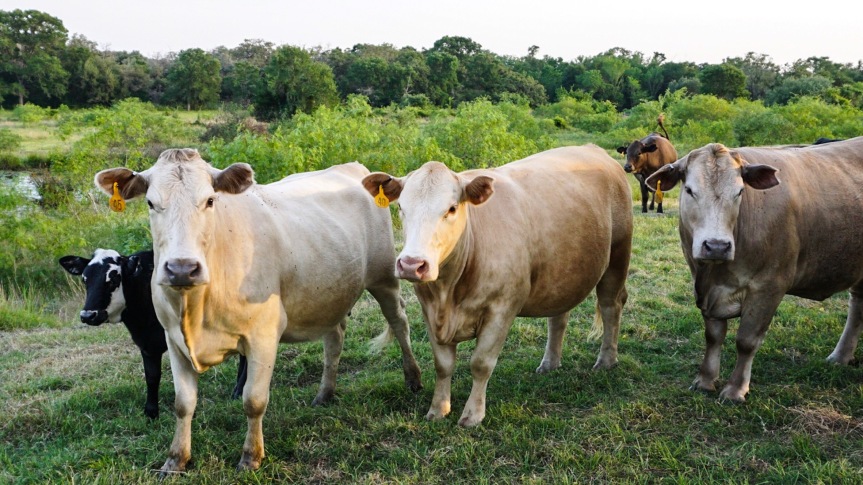 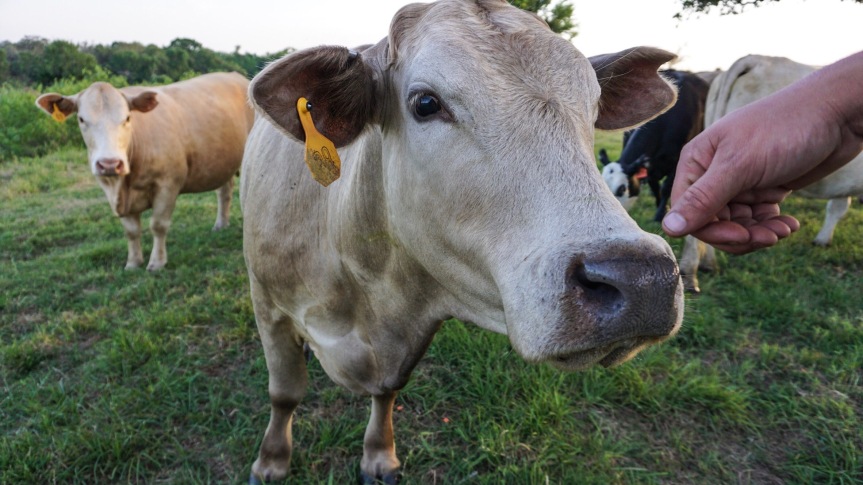 These cows are about to drop the hottest album of the year. 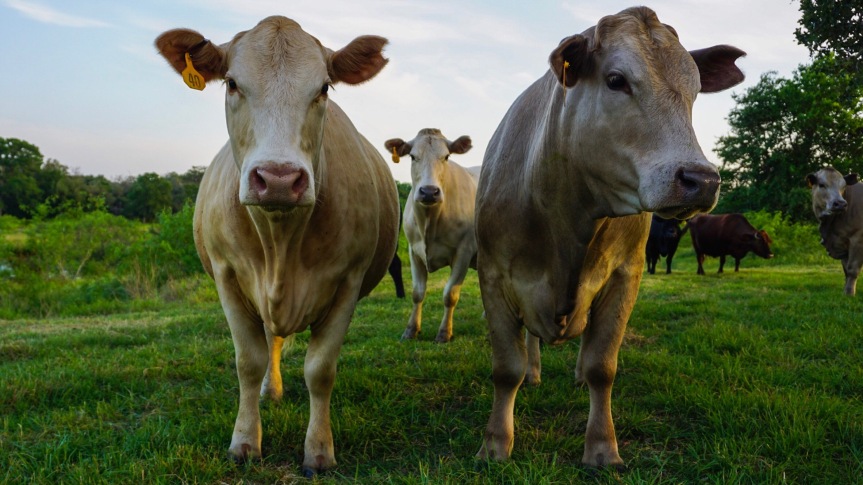 After we fed the cows, Bella went blackberry picking. The Ranch is absolutely covered in wild blackberries. So far I’ve made four pies and a huge batch of blackberry sauce for ice-cream.

The other day while out picking I stumbled upon the cutest thing I’d ever seen — newborn fawns! Twins! Their mom had hidden them inside of a blackberry bush for safety while she went off and did whatever momma deer do right after giving birth.

While Bella picked blackberries near where I found the deer (I checked and the babies were long gone) everyone one else set up for target practice. I’ve never been much of a gun person but target practice at The Ranch is a long-standing tradition in Brandon’s family. They don’t hunt animals but cardboard targets and clay pigeons don’t stand a chance around here. 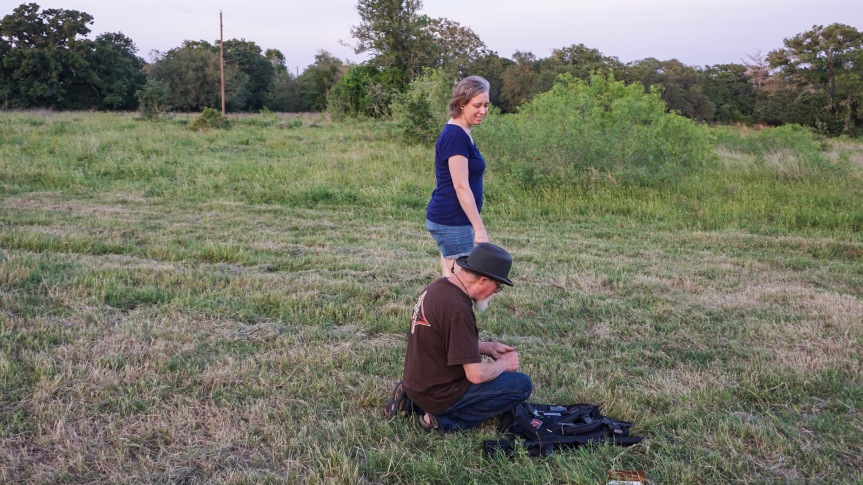 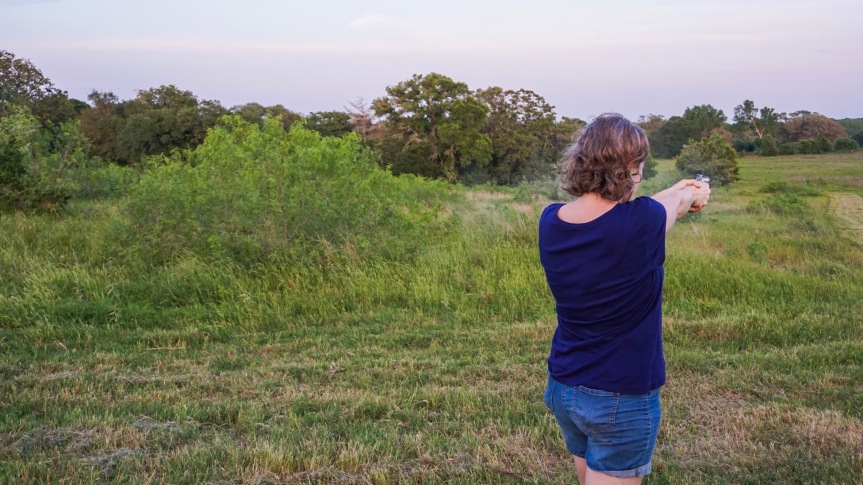 Birger getting a lesson in gun safety from Brandon. This was Birger’s first time shooting a gun and he hit a clay pigeon on the first shot! 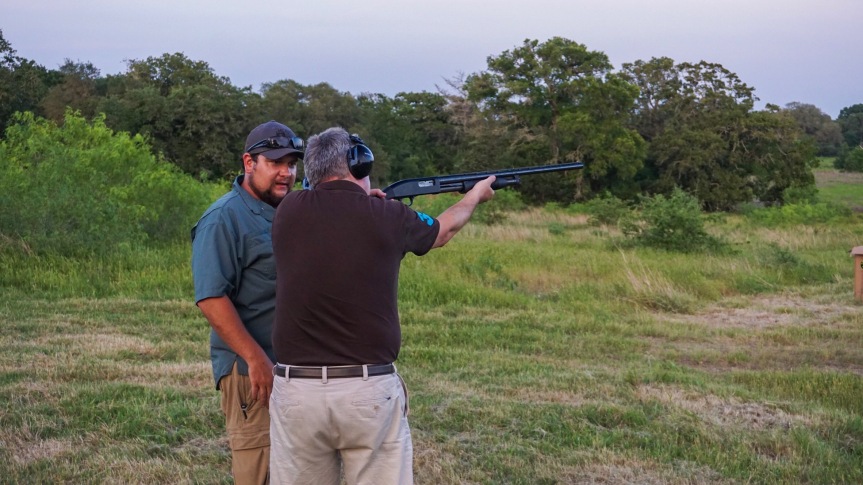 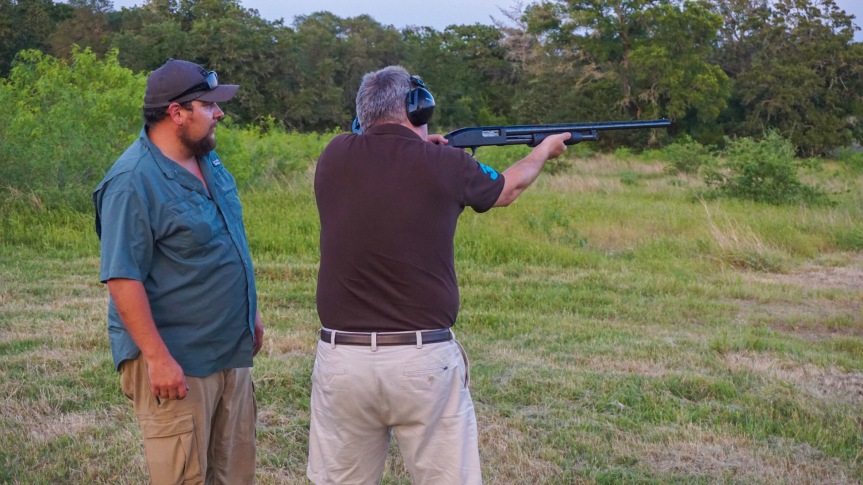 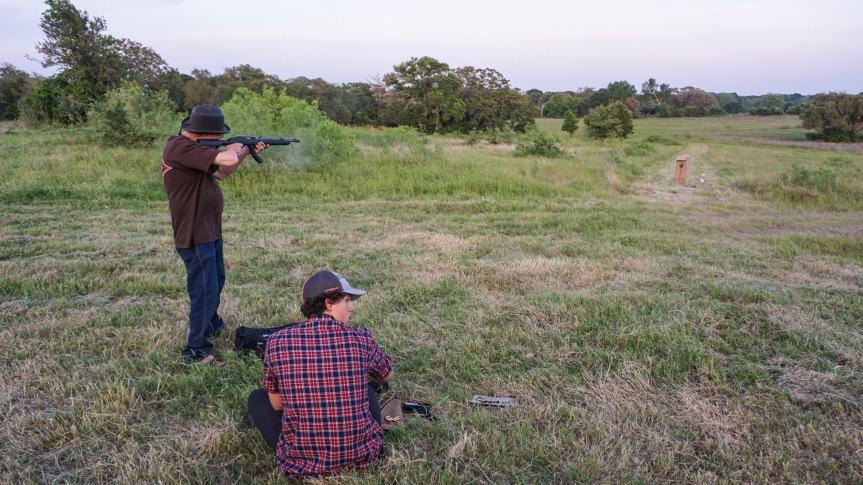 Brandon’s Uncle Richard generally comes to every family gathering equipped with a small arsenal, half of which is medieval. This weekend he brought swords, a hand-shield, and a long bow. And guns. He always brings guns. 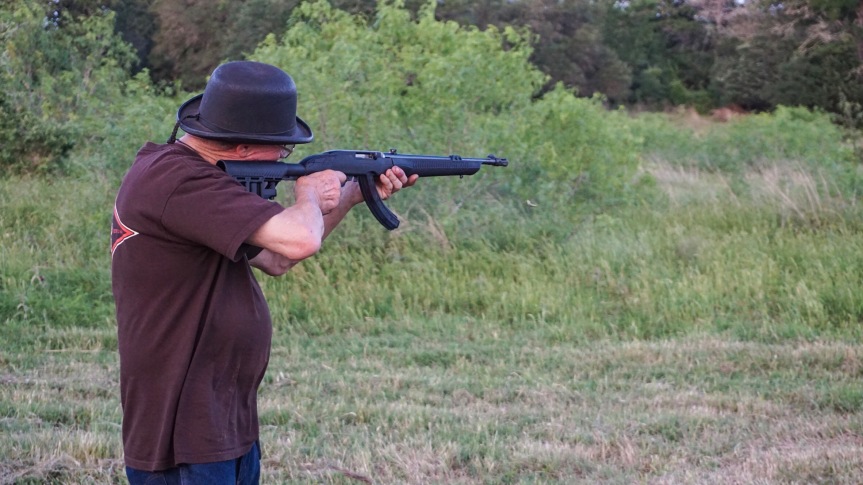 If you look closely you can see the little orange clay pigeons flying through the air. 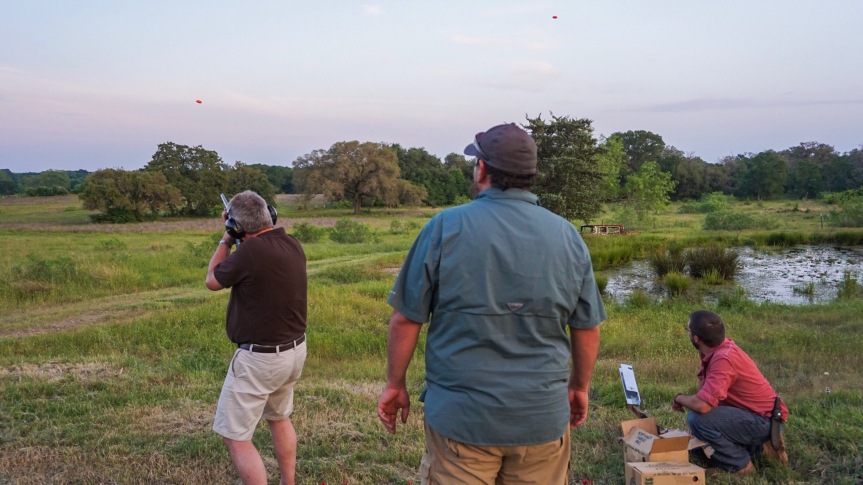 So there you have it. Easter Sunday — Texas style! It might be a little unusual, but who’s family isn’t! 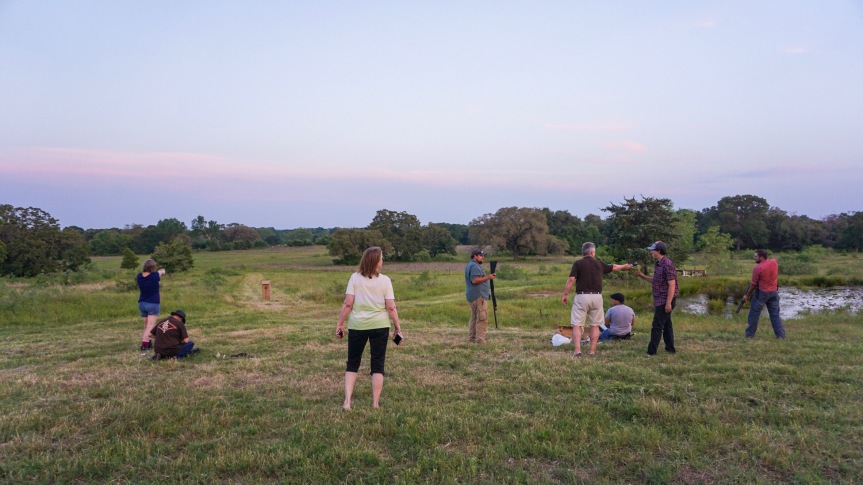