Those of you keeping track have undoubtably realized we are back in Texas. We left the Bahamas right after Christmas and it’s now the middle of March. So, you ask, what on earth have we been doing? Why aren’t we back on the road sharing our adventures with you, dear reader?

We always planned to spend the month of January at home in Texas. We would visit with our friends and family. Spend time with our dog. But most importantly, we would shop for a plot of land where we could eventually build our home. Once we’d found the land we could get back on the road and drive east towards Florida. My mother doubted that we could find and purchase land in only a months time. She and my dad had spent a full year looking for the right place when they built their house 30 years ago. Well, she was wrong, but I think we just got lucky.

While we were still in the Bahamas, Brandon came across a listing for 35 acres just outside of Bastrop. As soon as we returned he drove by to have a look. He was sold. I was skeptical. We hired a realtor so that we could go have a proper look at the place. From outside the gate all we could really see was a hay field and a nice grove of mature oak trees. We knew that there was a dry weather creek running through the property, which is absolutely magical, but also a bit concerning. A portion of the property is a known flood zone.

It was the very first property we looked at and, honestly, we could have just stopped right then. I find that the biggest decisions in life are not actually that difficult. Who to marry, which house to buy, whether to quit your job and live in a big blue bus. If you trust your gut instincts you don’t really have to think much to make the right decision. You just know.

We put an offer on the property that very same day. The property just had an energy about it that made us feel at home. Still, I ended up spending the next eleven days feverishly researching local flood history, building restrictions, and learning all about our local endangered toad population. (Our new place is right in the middle of a protected habitat area for the endangered Houston Toad.)  The decision to buy was quick and easy, but I was convinced that with enough research I would uncover some glaring problem with the property that would ruin all of our plans. At one point I even got a quote for the cost to install a drivable steel bridge across the creek. Which, for what it’s worth, is an incredible amount of money. A wooden foot bridge will have to suffice for now.

While I drowned in research, Brandon remained confident that we had made the right decision that very first day based on nothing more than a feeling. And he was right. I never found a smoking gun. Yes, the creek floods. But the constant source of water nurtured beautiful groves of trees and provides a habitat for the local wildlife. And the saturated soil likely saved the entire property from wildfire a few years ago. Sure, it’s not the easiest place to build. But it’s also not plain, ordinary, or flat. It has character and interest and we’re so very excited to make it our home.

Also, Rudy absolutely loves it. And that’s really all that matters, right?

A few weeks ago we were actually all set to leave. I was doing the last load of laundry and buying groceries for the trip while Brandon was enjoying a last visit with his siblings, as we planned to be on the road for a few months doing a loop of the gulf coast states. On the way home from dinner Brandon was hit by a drunk driver while crossing the bridge in La Grange. Don’t worry, Brandon is perfectly fine. He wasn’t injured at all. Thankfully. But the Jeep is in pretty bad shape. The wreck completely bent the frame, taking the Jeep out of commission until we can get it fixed. And without a tow car, we really can’t go anywhere.

The repairs are going to be covered by insurance, but dealing with insurance is not exactly a quick process. So for the time being, we’re stuck in Texas.

The photos below were all taken at Brandon’s family ranch just before the accident. We already miss having Gunner around. 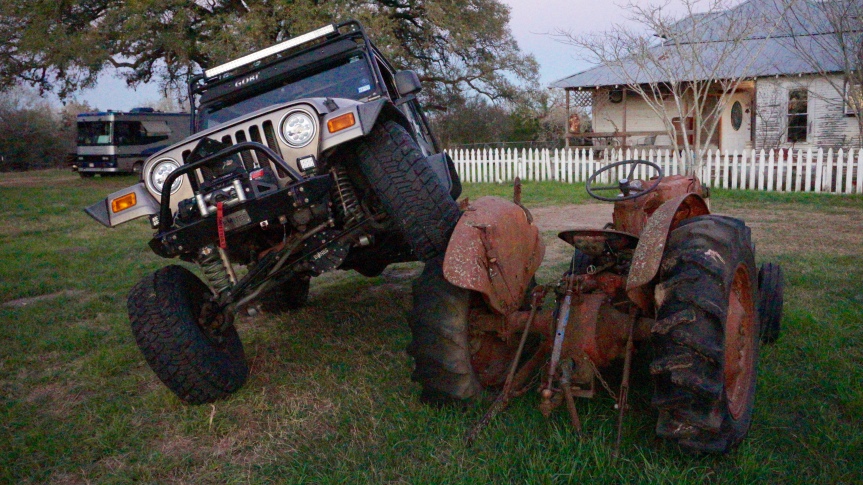 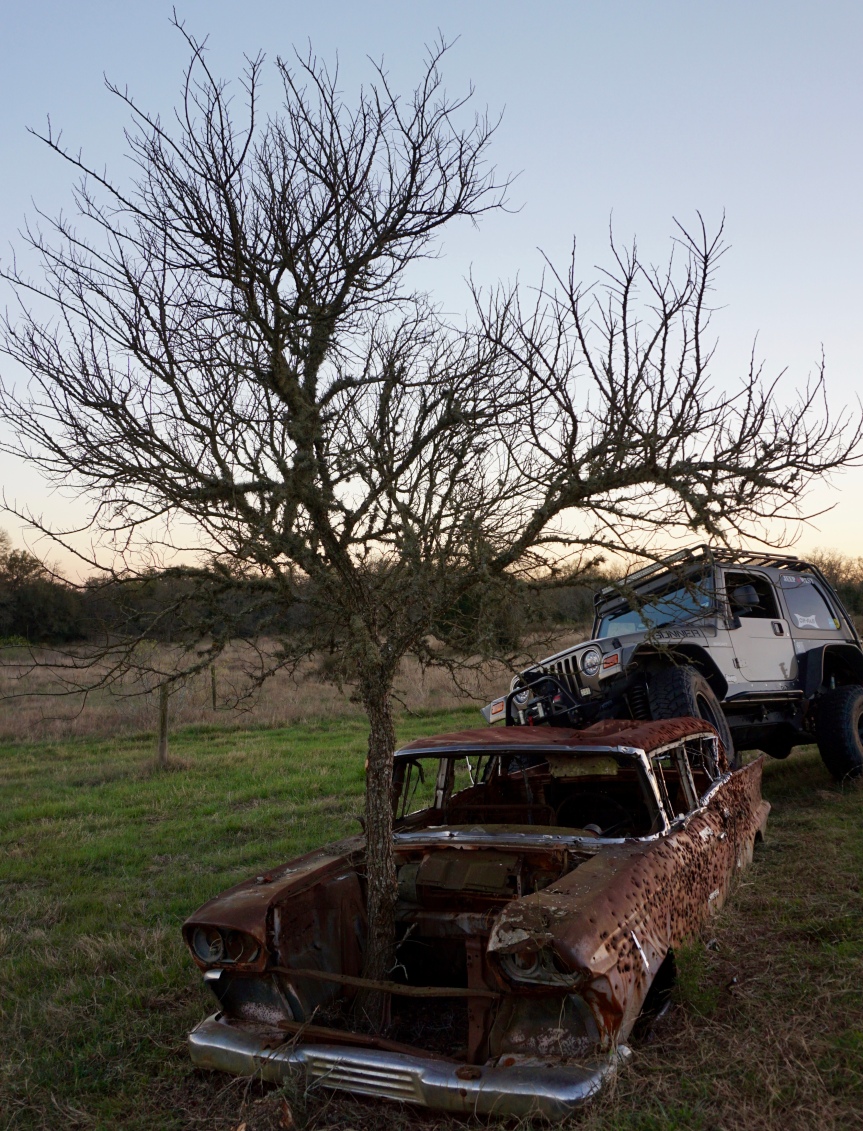 And yes, those are bullet holes you see all over that old car. They’ve been using that rusty hunk-a-junk for target practice for as long anyone can remember. 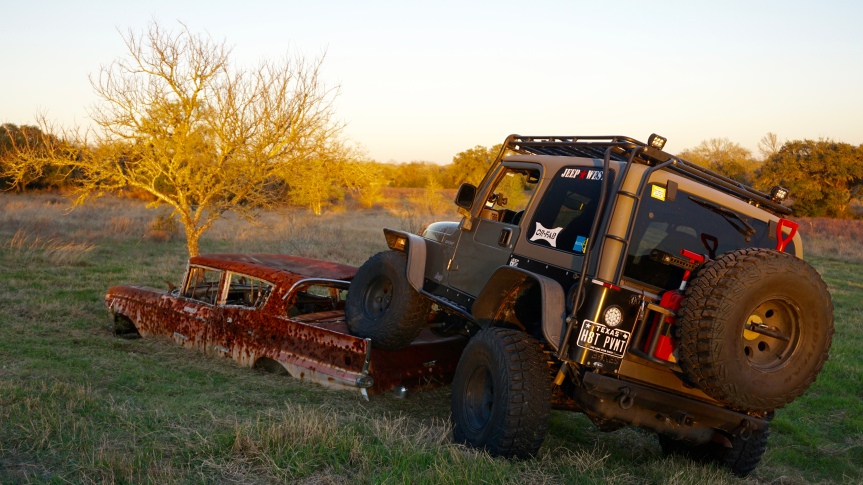 We are super bummed about the change of plans, but we’re trying to make the best of it. We have tons of work to do on the new property so we’re jumping into that head first. We’ve already met with an architect to talk design plans and we’re working on getting the permits in place to break ground and start running the utilities. It’s all super exciting and entirely uncharted territory for us. Moving forward with development plans also gave us a reason to buy a tractor, which Brandon is absolutely in love with. Just look at the size of those tires! And it’s four-wheel drive! He is actually out shredding the field as I type this. He mowed just last week, but he’ll take any excuse to drive this thing.

This is also not the end of our travels. It’s just a change of plans. We have two international trips in the works — a two-week trip to England in May and a one-week trip to the British Virgin Islands in early July. And in the meantime we get to work on our land and explore the wonders of central Texas in the springtime. The bluebonnets came early this year and we’re already breaking out our shorts and thinking of pool parties. And just to keep things interesting I’m planning a few short weekend excursions, one to the world-famous antique fare in Roundtop, Texas and another to ye’ olde renaissance faire in McDade, Texas.

Basically, life is good  — even when it doesn’t go exactly as planned.

3 thoughts on “Update: Buying land and a change of plans”