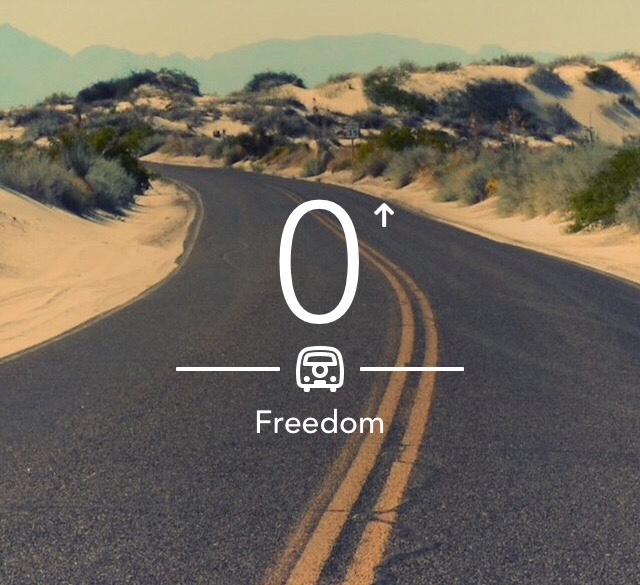 I started this countdown clock on my phone nearly a year ago. It has been counting down the days until my final day at work ever since. I have celebrated the major milestones. Finally making it to the double digits, under 50, under 30, etc. Then last week someone asked me what was going to happen when it reached zero. I realized I had no idea. I had never tested the app to see what it did when you reached the end of the countdown. I just set the date and waited. Ever since, I had been secretly hoping that it would do something cool, like send me a congragulatory text message or at least make a loud noise. It turned out that the countdown clock just showed “O” days left and then started counting up – the number of days since you hit zero. No alarm, no message. It just kept on counting. Although I was super excited to wake up and see it say zero, I found the clock to be a bit anti-climactic.

If I’ve never mentioned it before, I was a judicial clerk to a trial court judge in Portland. I was in charge of managing the courtroom and generally just doing whatever the judge needed. We handled mostly criminal cases and it was awesome. But my last day of work was Friday, February 26th. Although I couldn’t wait to quit my job because that would mean that it was finally time to hit the road, I was also really sad to leave. I actually loved my job. I had quite possibily the world’s best boss. Judge, if you’re reading this, thank you for everything. I’ll be sure to send you the first post card. I had some amazing co-workers that became great friends. But most of all, being in court every single day was just so darn interesting. Although I think it will be nice to slow down for a while, I know I will miss the fast pace and drama of the courthouse.

Something that made leaving a bit easier was being able to help hire my replacement and train her before I left. I was able to leave knowing that the courtroom would continue to run smoothly. Angela, if you’re reading this, I hope things are going well and that you love this job as much as I did.

I knew it was time to leave but I still cried when I turned in my key and ID card.

Brandon was quick to remind me, however, that our work here in Oregon was not really over. We still had to pack up our entire house, sell my car, and get the house read to sell.  But now that I no longer had a “real” job I would be around to help with all the little pr0jects.

Brandon quit his job back at the end of December so that he could start getting ready for the move and take care of final preparations for our trip. His original to-do list was many pages long but he managed to accomplish quite a bit while I was at work every day. He has been busy hiring and managing contractors as well as doing a ton of work himself.

In addition to all of the packing and home repair projects Brandon also had a number of automotive projects on his list. (Obviously. After all, the next year of our lives revolves around things with engines.)

One of the big projects was having his Model T Ford transported back to Texas for storage. The car does not currently drive because it needs some engine work but it was a gift from Brandon’s late grandfather and is very special to us. Brandon and our neighbor, Eric, have spent many hours in the garage working on this car while we’ve been in Oregon. They took took apart the entire engine and even found strips of old Levi’s stuffed inside the rear axle in place of the axle seals. Ahh, the ingenuity of roadside automotive repair.

We towed the Model T to Oregon on a trailer but will not be able to do that on the way home becuase we will be driving the RV and towing the Jeep. We needed to find a car transport company that could move it for us. Brandon took care of all of this and also found a storage unit in Texas where we can keep the car until we re-settle in Texas and have somewhere to store it ourselves.

Because the car does not actually run he wasn’t able to drive it out of the garage and down our very steep hill. We talked about towing it down with the Jeep, but in the end Brandon decided to put the car in nuetral and just roll it down the hill. He was in the driver’s seat applying the brakes so the car didn’t just careen down the hill and accross the street. Once at the bottom of the hill, the truck driver was able to tow the car into its place in the truck and off it went. We got confirmation that the car was delivered to the storage unit a few days later but we will be happy to finally check on it when we get to Texas. 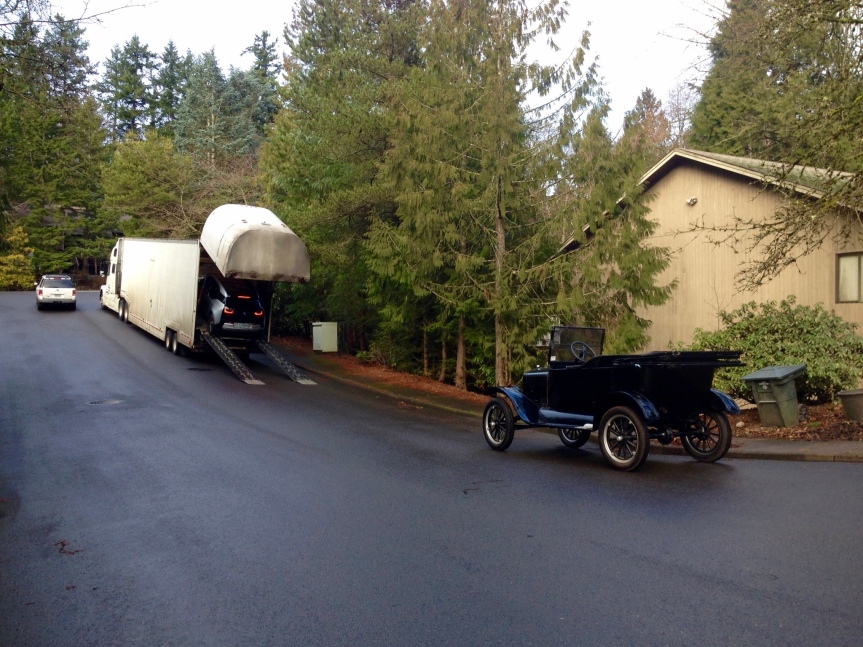 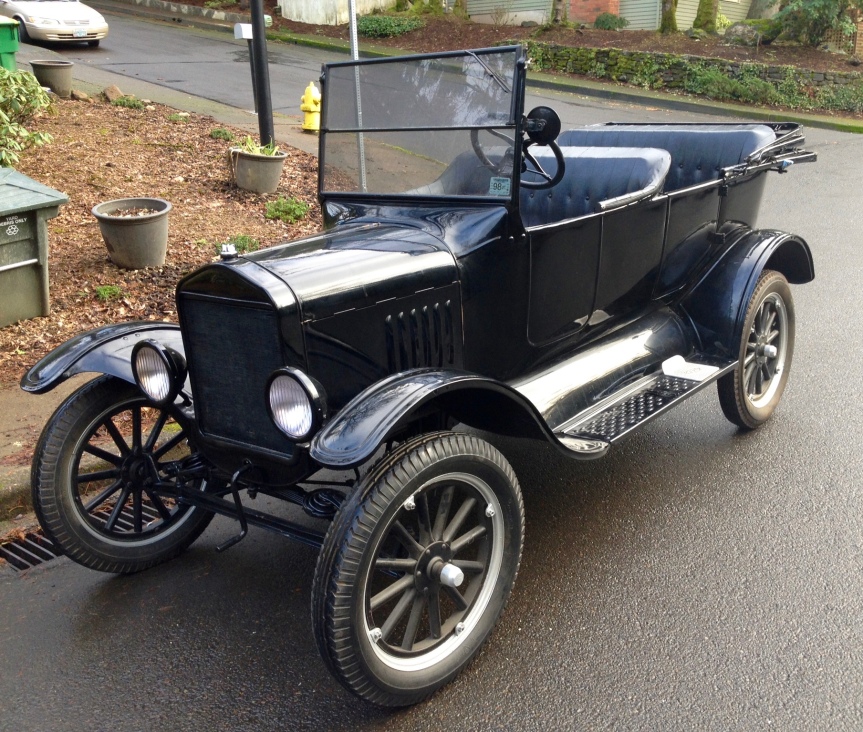 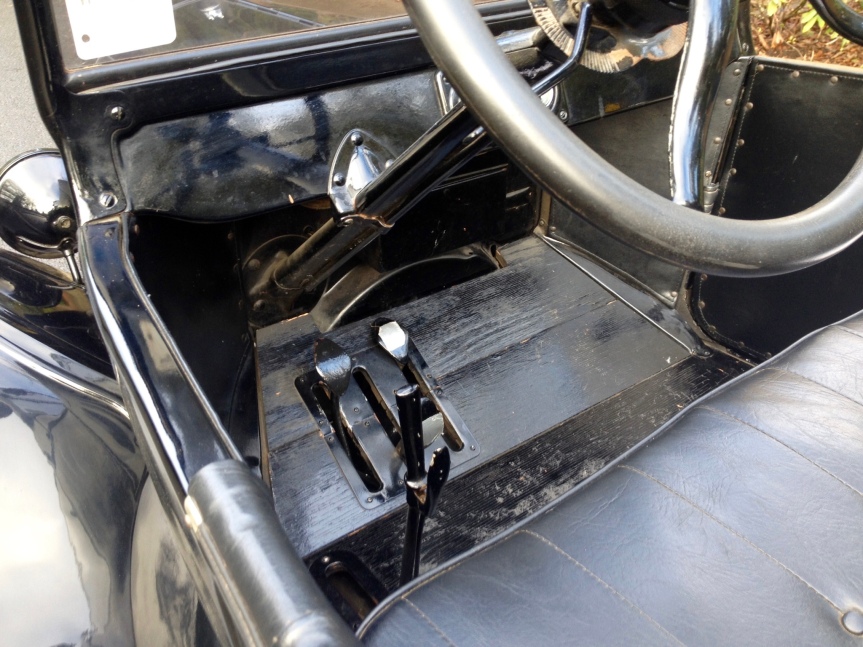 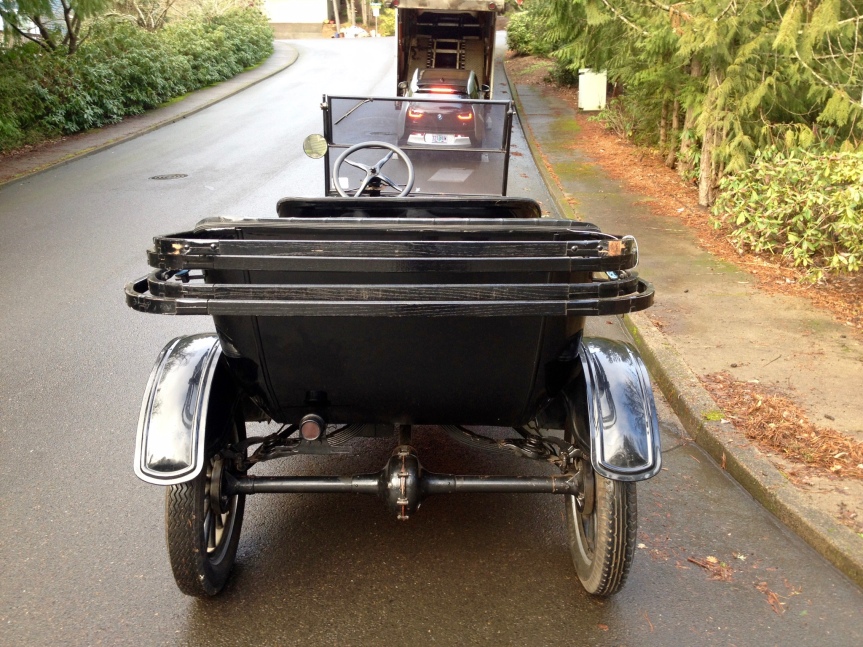 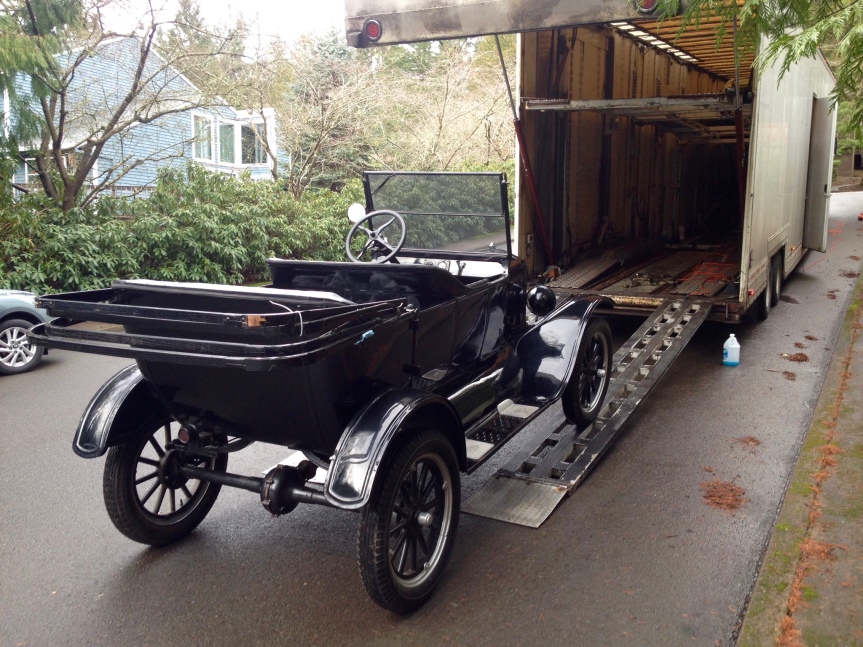 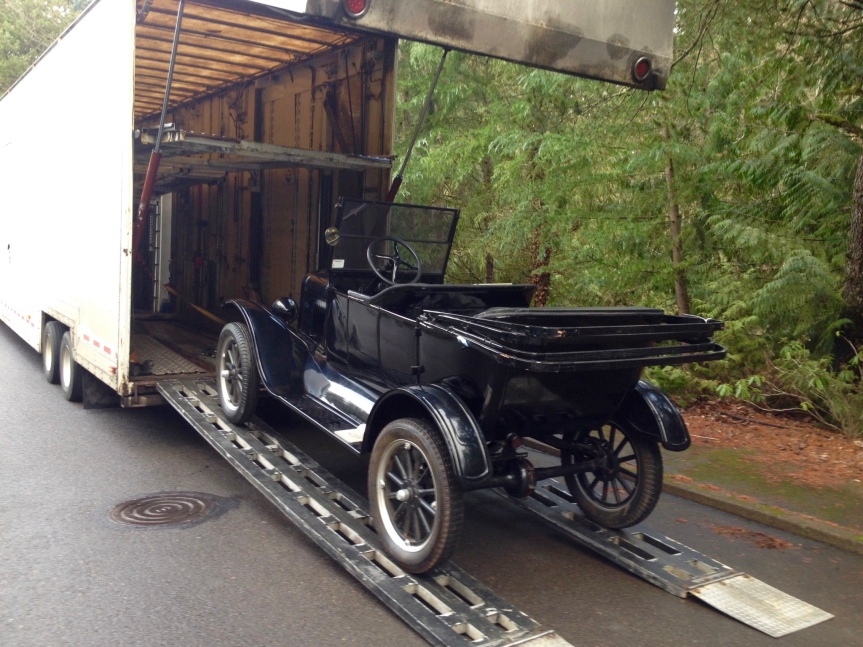 Brandon’s current favorite car project has been our Jeep, Gunner. I should probably have Brandon write a post about Gunner some time becuase I’m bound to leave something out but this is the gist.

A while back we joined a Jeep group called Jeep Nation. It is a really fun group of people who also own Jeeps and like to take them on off-road adventures. The group is mostly in Oregon but is technically a nationwide club. One plus of being in this group is that we have  met some very talented people that work on Jeeps and make custom Jeep accessories. Brandon wanted to take advantage of this opportunity and have some extra work done on the Jeep before we left.

First, he went to Bones Custom Creations where a man named Chris Sines makes custom body armor and bumpers for Jeeps. Brandon ordered a pair of rock sliders, body armor, and a custom bumper. The rock sliders are installed around the Jeep body underneath the doors. They protect the body of the Jeep from damage when driving over large rocks, logs, etc. They also act as a step, making it much easier for me to get in the Jeep now that it is lifted. The body armor is installed on the rear panels of the Jeep and wrap around the back to the tailgate. These also protect the body of the Jeep from damage. Because Chris makes all of this stuff himself if all fits together seamlessly. 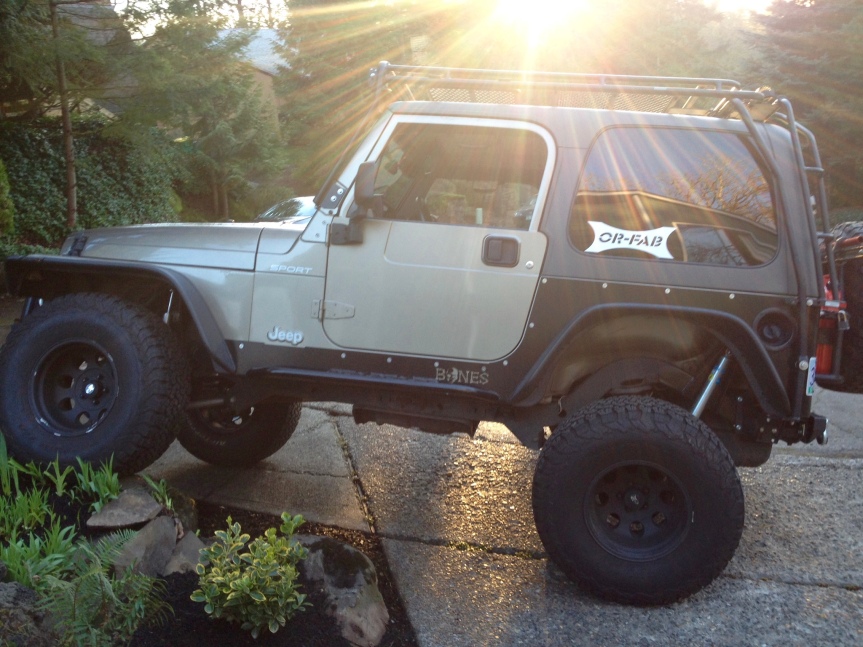 Brandon is very proud of his new bumper, also made by Chris. This was a new design he was working on so we actually got the first one in production. Model no. 1! What’s great about this bumper is that it works with both our winch and our tow bar. 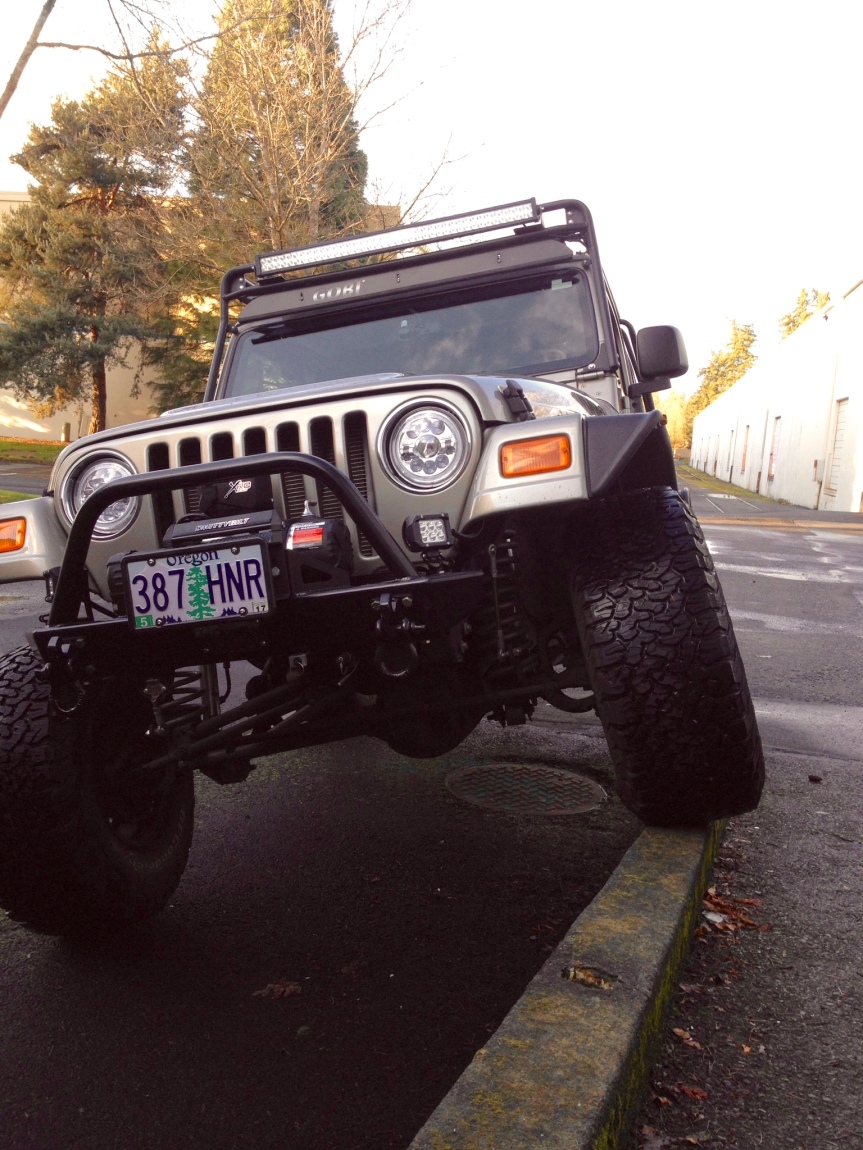 Next, Brandon took the Jeep to David Kishpaugh at Jeep West. David is known as a bit of a Jeep guru here in Oregon. All he does is work on Jeeps and he specializes in modifying them so that they can go places you would never expect a car to go.

Brandon took the Jeep to David for what he calls the “magic ride” package. This works with our existing lift but increases the quality of the ride dramatically. David actually sold Brandon on the project by handing him the keys to one of his Jeeps and telling him to take it for a spin. Brandon was so impressed he says  he “couldn’t say no.” Furthermore, many Jeep modifications either improve driving off-road or improve street driving, but this actually improves both. The modification involves increasing the travel length of the shocks, adding an off-road sway bar, and outboarding the rear shocks so that they are located on the outside of the frame rather than inside. This increases both the up-travel and the down-travel of the suspension, allowing the tires to articulate. Good articulation is important for off-road driving becuase it allows you to maintain traction when driving over large objects like rocks or logs.

Articulation is also refered to as “flex” and Jeepers like to “flex on things”, like the boulders in our front yard, tree stumps, high curbs, and loading docks. I tease Brandon that he only got the magic ride so he can park funny.

In fact, every Jeep that gets picked up from Jeep West gets to flex on the “Stump of Approval”, seen below. 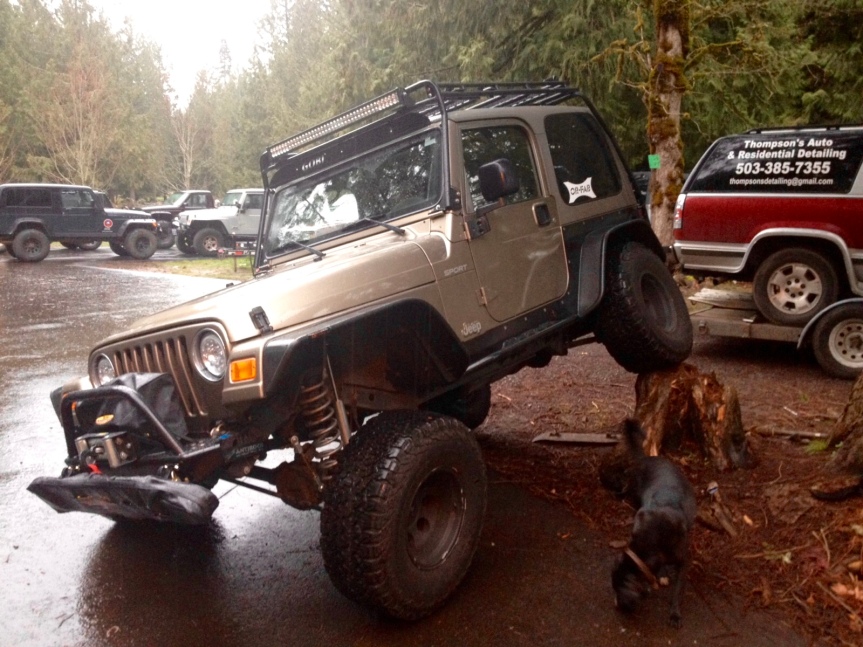 David also did the install on our body armor, modifying the panels to work with our existing tire carrier. He also modified the front bumper, creating custom brackets for moutning our tow bar. Finall, he had all of the Bones  custom armor powder coated for us. 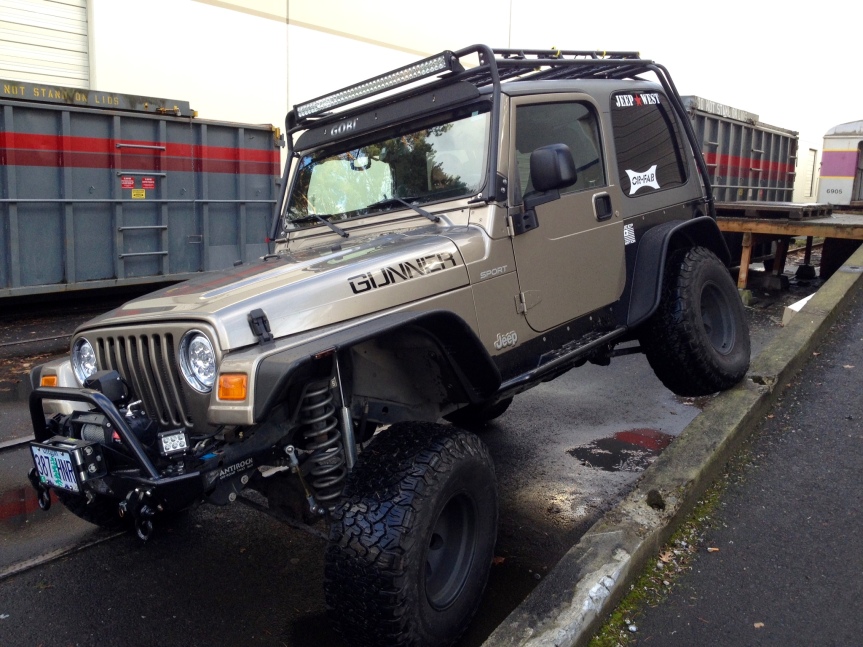 We’ve got a ton of home repairs ahead of us that won’t be nearly as exciting as the Jeep , but we’re hitting the road in two weeks, which makes it all worth it. More soon!

It was really for baby Kolten but it looks just as cute on big sister Brooklyn #snugglethismuggle⚡️ #youreawizardbrooklyn #bestauntieaward #harrypotterchristmas
Walkin' in a winter wonderland! 🎶🎵🎶
One more thing I didn't bring home from the Antique Fair. At $400 these Australian Shepard puppies were a bit outside my shopping budget. Also, Brandon would probably have put ME in the doghouse if I came home with a puppy 😬 #justlookatthatface #puppylove ❤️ But still, #adoptdontshop #rescueismyfavoritebreed
The cutest little wedding chapel in Texas! #roundtop #henkelsquare #hawcreekchapel
I had so much fun hanging out with my little sister in law today at the #antiquefair! @belladwinell_ you're the best! ❤️
Indoor "glamping" in retro trailers. It seems strange but the whole building is air conditioned and after a hot day of shopping, this place would be pretty welcoming. And it's super cute! #girlsnightin #glamping #vintagetrailer
Antique Fair round two! I didn't buy the throw pillows but I did buy this adorable apron! #antiqueweek #nowigottabakesomething
When you go to the #roundtopantiqueshow it helps to set a spending budget for the day. These pillows are what I would have bought if I had not already maxed out my spending budget. #adulting #ineedabiggerbudget #farmanimalsarethecutest
Read the description. And this is no where near the strangest thing you'll find at the #roundtopantiqueshow
This dress was gorgeous. But where would I ever wear it! The artist does all hand-dyed silk. Anyone shopping for a unique wedding dress? It also has a long train. #tiedyedutopia #silk #uniqueweddingdress