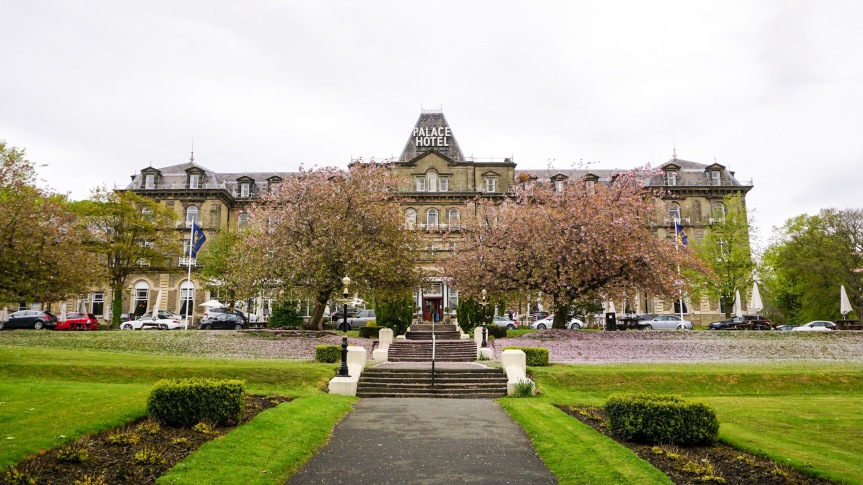 Our new friends Martin and Andy had strongly recommended that we finish out our roadtrip with a visit to the Monsal Head Hotel. They had both been there numerous times and told us in glorious detail about the amazing view, lovely walks, and wonderful accommodations. We were sold. Unfortunately, there was an international horserace going on that weekend (we were in Derbyshire, after all) and everywhere was booked solid. We could book two nights, but not the long relaxing three-nights stay we were hoping for. We went online and found the best-looking hotel nearby to fill the gap — The Palace Hotel in Buxton.

This enormous 600+ room hotel was built in the 1800s on a hill overlooking the “spa” town of Buxton. I’m still not entirely sure what makes it a “spa” town but that’s how they advertize themselves. The hotel still has an impressive presence over the town but has clearly seen better days. 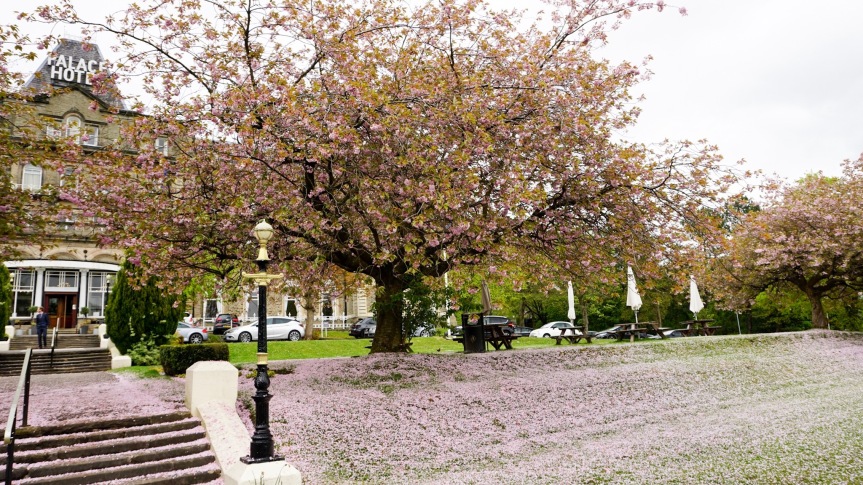 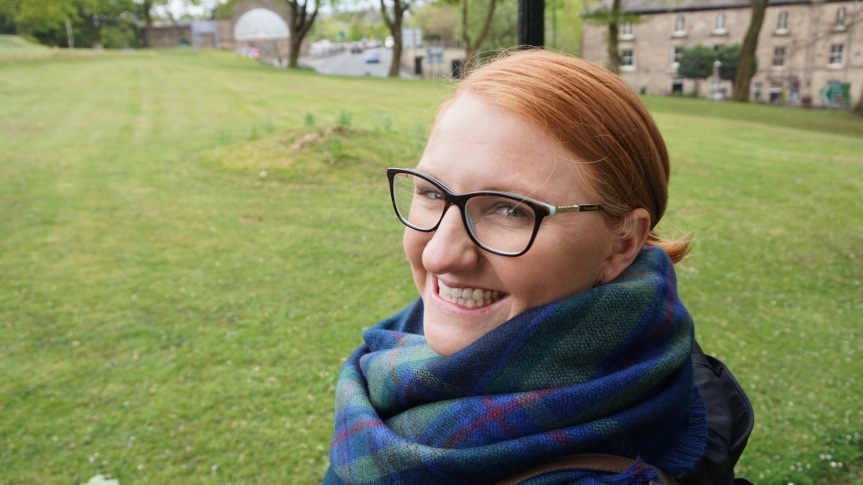 I suspect the place has been in desperate need of repair for some time but the owners don’t have the money to properly renovate such a large space. Honestly, I’m betting Buxton doesn’t actually get enough tourists to support such a large and elaborate hotel. They seem to be keeping the place alive through many coats of paint to cover the decay. The only real renovations have been in the lobby, bar, and dining room. 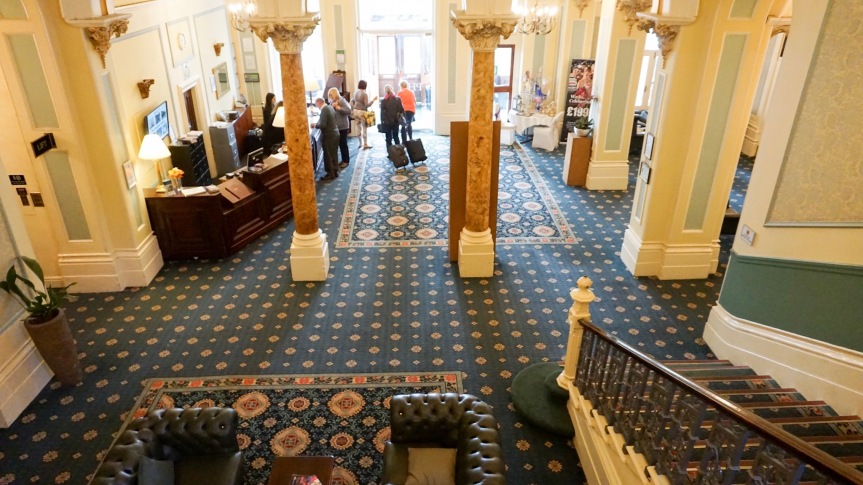 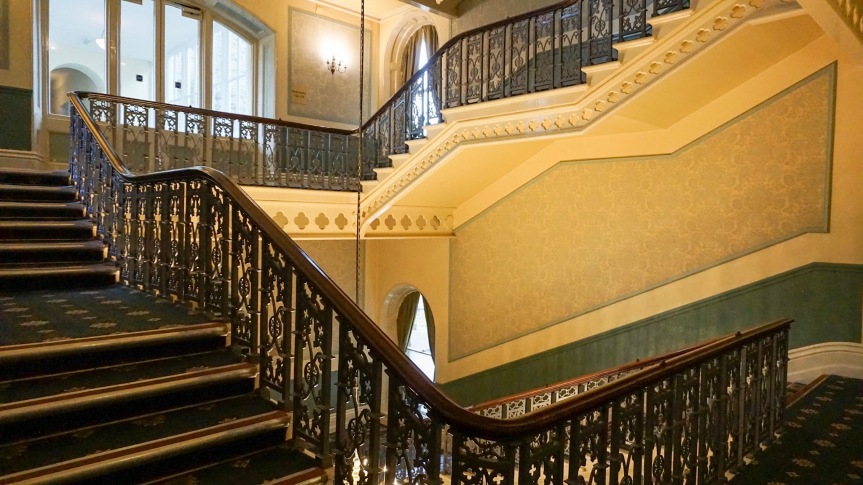 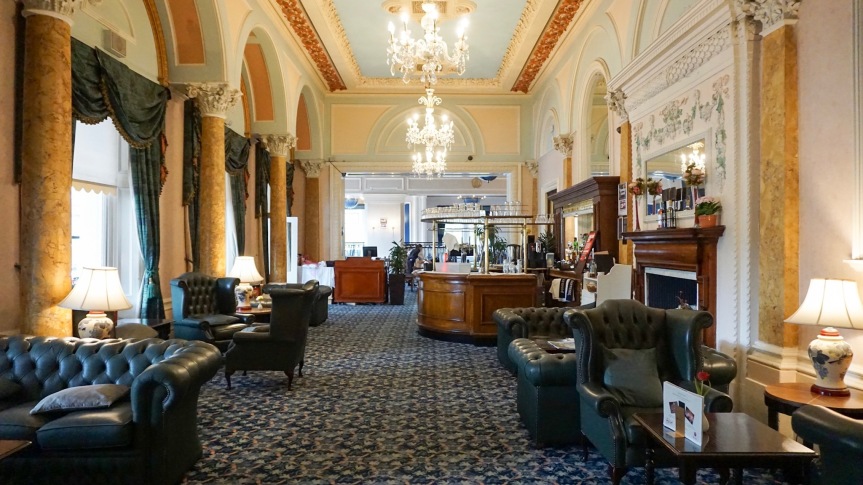 The lobby, with its grand staircase, shows how opulent this place might have been in the past. It is still beautiful and we were initially impressed when we checked-in. We even made a reservation for dinner and talked about dressing up for the occasion. Once we made it up to our room, however, we started to see the problems.

Our room was enormous but very cheaply and sparsely decorated. They also installed the ugliest carpet I have every seen outside of an airport. 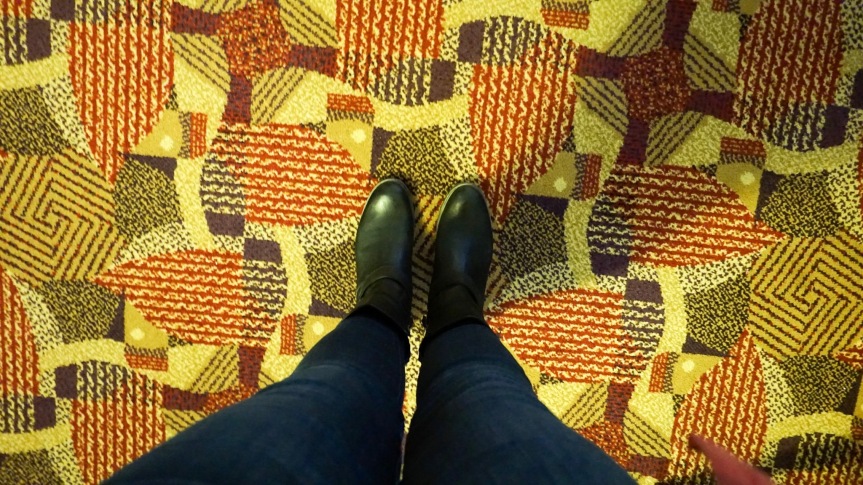 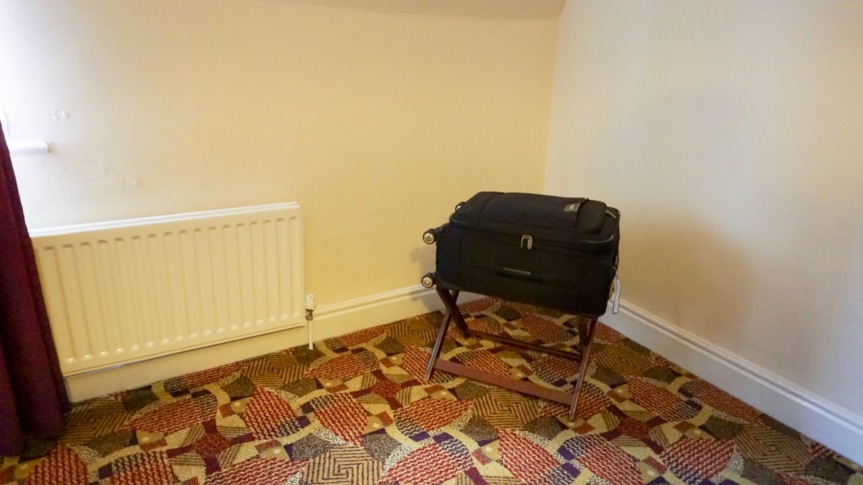 All of the furniture is cheap particle board and the lamps are dated, crooked, and trimmed with strange gold lining. 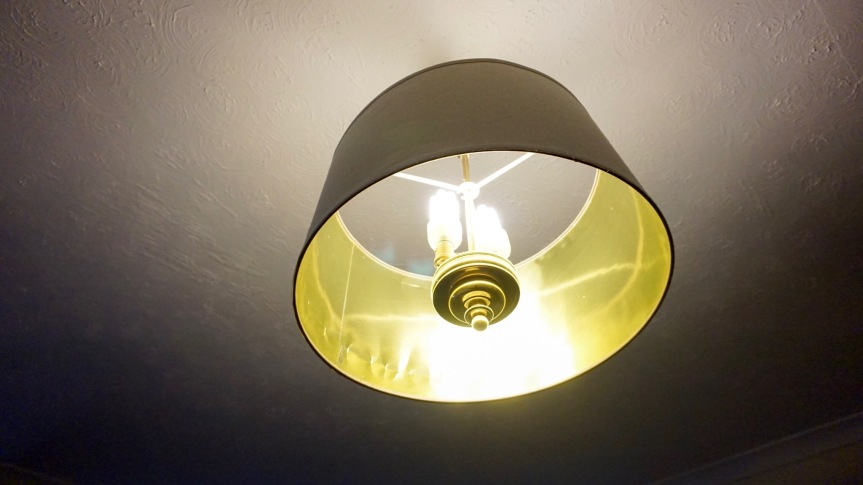 The bed was a double but had collapsed springs on one side. The only pillows were two very flimsy old ones.

The bathroom was big but institutional. It would have been more fitting for a hospital. All of the grout needed to be redone and none of the doors would close properly. I’m guessing the entire building is unlevel. Strangest of all was the warning about closing the door properly when showering to avoid setting off the fire alarms. An impossible instruction to follow given the fact that the door actually didn’t close due to leveling issues, but I was mostly concerned about the state of their fire alarms. 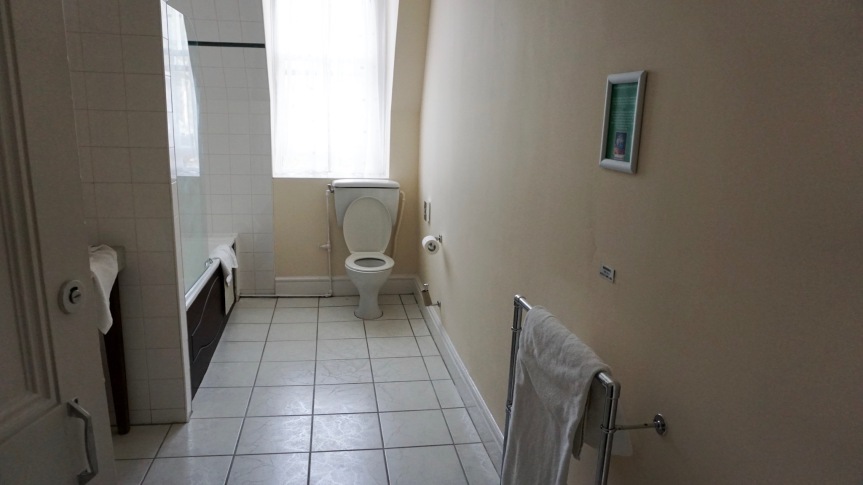 They didn’t even give out individual hotel toiletries. There was a just a soap dispenser in the yellowing shower.

Overall, the attention to detail in the rooms was zero. Strange and haphazard towel placement, no soap dish. The bare minimum. Also, the toilet must have used 6 gallons a flush and seemed to run forever.

I know that I sound like I’m complaining (and I am) but I also understand how they got here. This place is enormous and a towering landmark within the town. It looks pretty good on the outside (so I’m guessing no one wants to tear it down), yet surely isn’t getting the revenue needed to sustain it, much less repair it. The money required for even simple room upgrades would be astronomical when you calculate how many rooms there are here. For example, replacing the old yellow telephones from the 90s would be a good start but they need to buy over 600 of them. 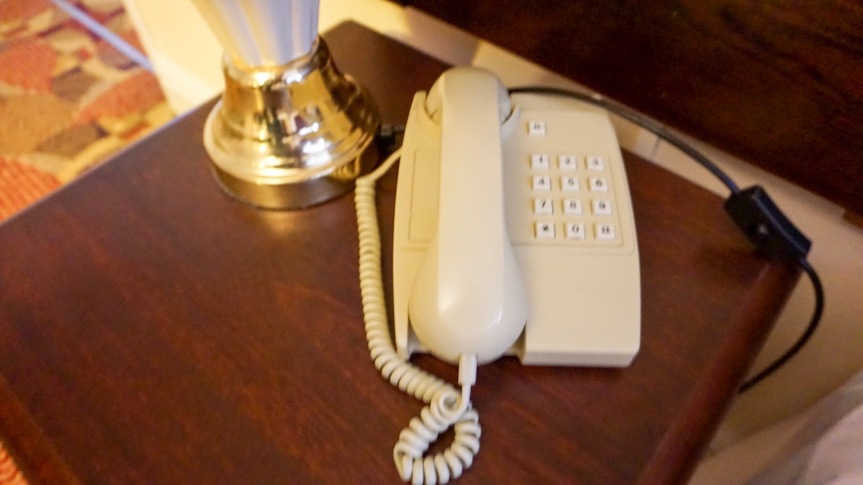 When we left the room we started to notice other things. Paint was peeling from every surface. They had used cheap fluorescent lighting and ceiling tiles in the hallways. There was also major water damage visible on the ceilings and walls. These folks are just barely keeping it together by making the lobby entrance look nice. 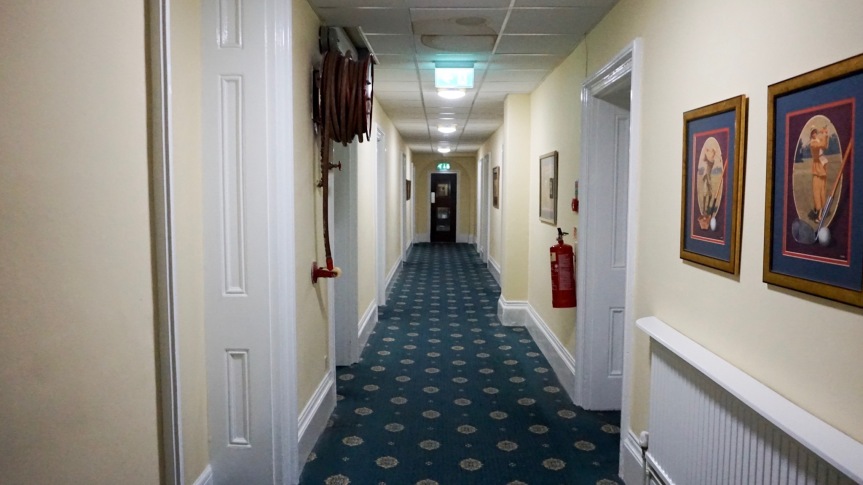 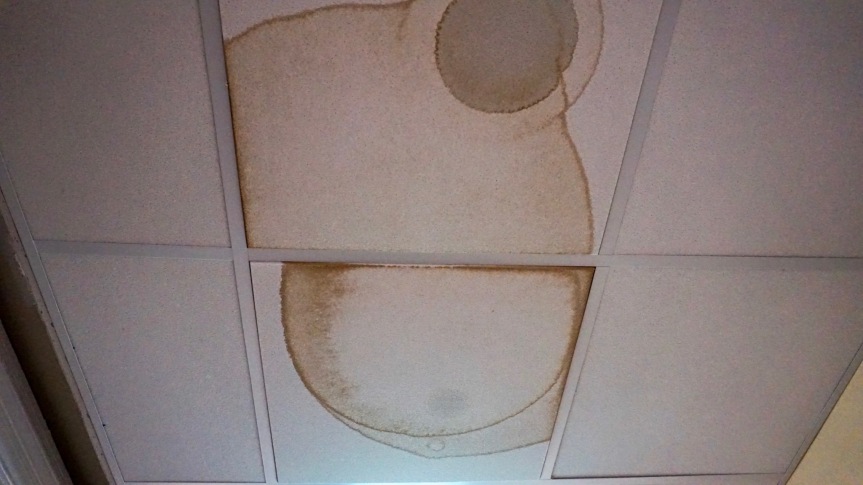 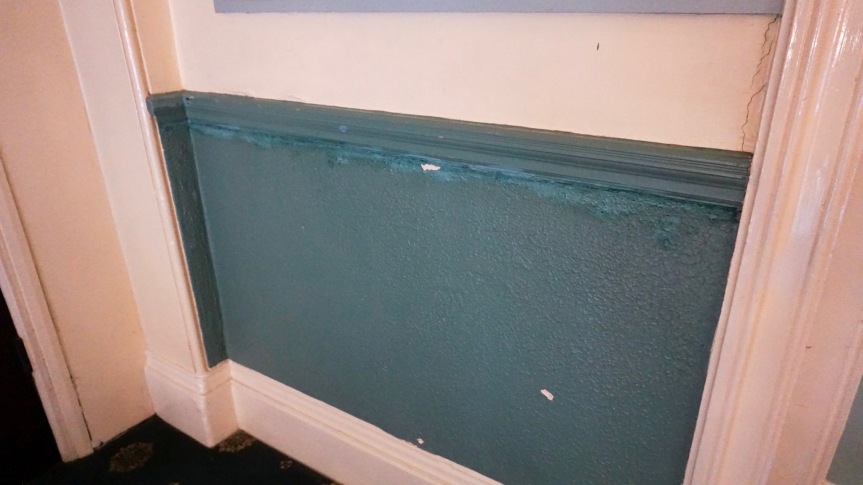 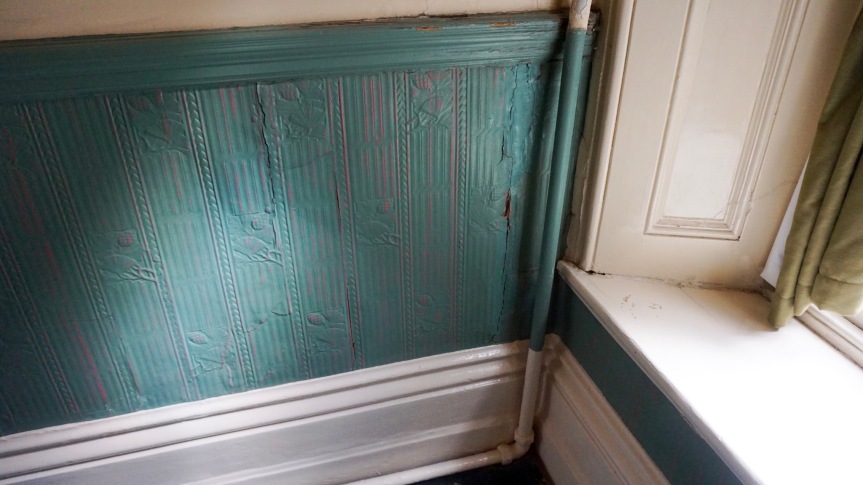 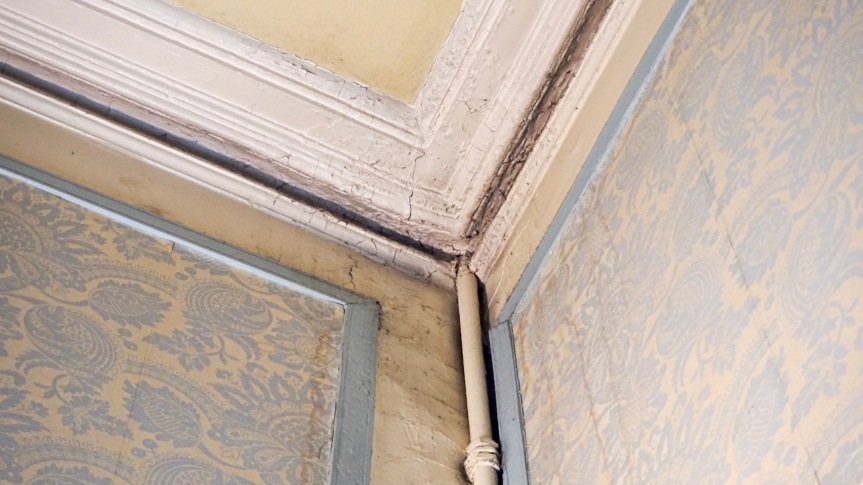 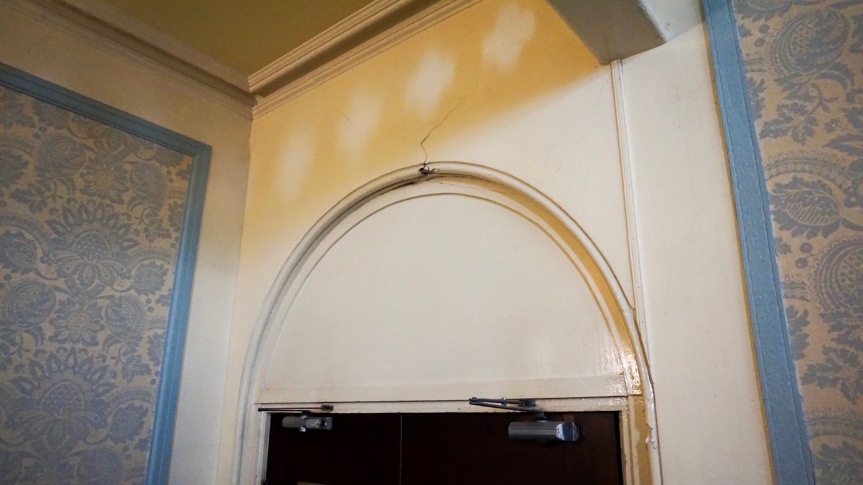 They offer spa services but only one person works in the spa and wasn’t there when I called or when I walked down to make an appointment. They also never answered the phone. I also couldn’t get anyone in the lobby to tell me what services they offered at the spa because the spa was run by an independent contractor. The whole thing was just so poorly managed. You would think they would try to promote the spa in a “spa” town.

We eventually decided to abandon our dinner reservation after reading the menu in the lobby and seeing “cheese salad” as an offering. We also noticed that they had all of the food out already out on warming trays, over an hour before the first serving was set to start. We figured that for £25 a person we could do much better than lamp-dried roast and cheese salad.

But not everything in Buxton was as shabby as the Palace Hotel. Before check-in we had stopped for lunch at a place called Simply Thai, which was simply outstanding. My red curry was some of the best I’ve had in years. 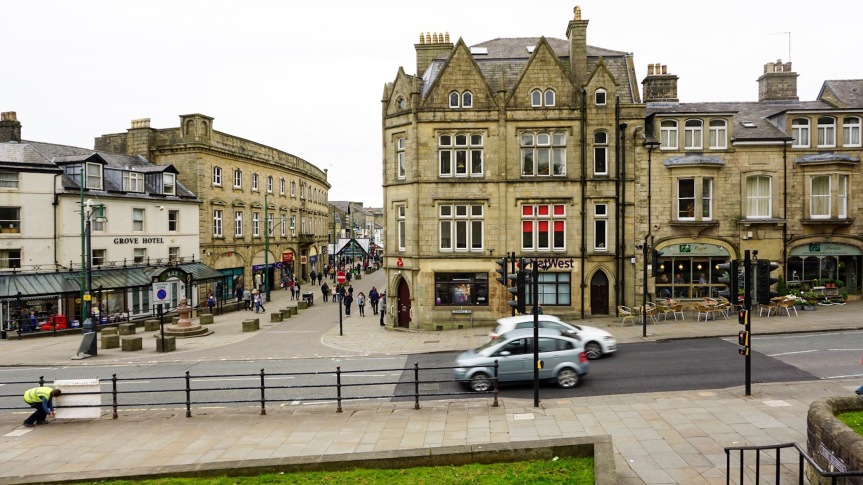 After check-in, Brandon decided to take a nap (despite the caved in mattress), while I went looking for a nail salon to fix my broken nail. I’m not usually a slave to manicures, but my thumbnail had cracked very close to the nail bed and I was hoping a salon could glue it back together so it could grow out painlessly and not snap off, leaving me with half of a thumbnail. 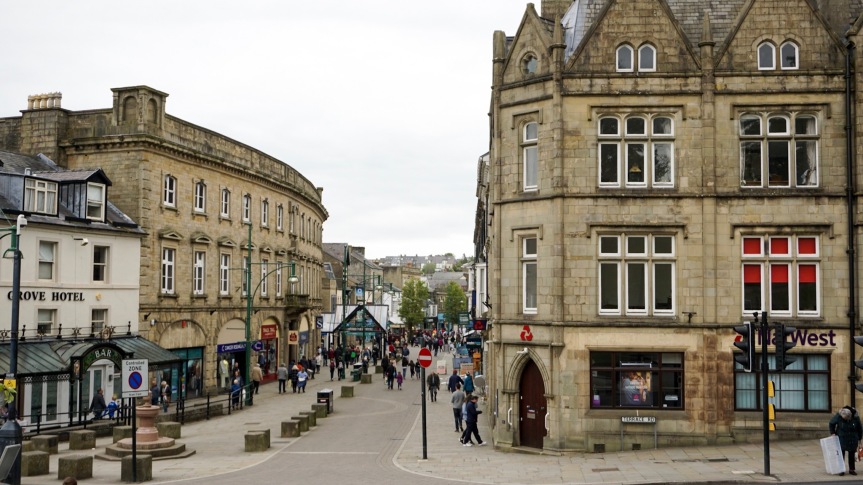 I also stopped by a used book store called Scrivener’s — five skinny floors of old and rare books. The owner also did book repair and binding on site. It was a pretty cool place that I wish I could have spent hours exploring. However, I’ve realized that I need to be careful with bookstores while traveling. They tend to make my luggage gain weight. 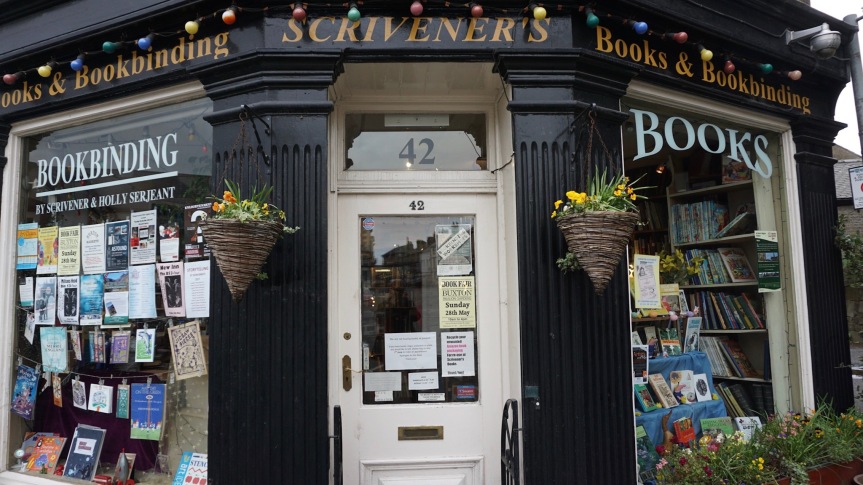 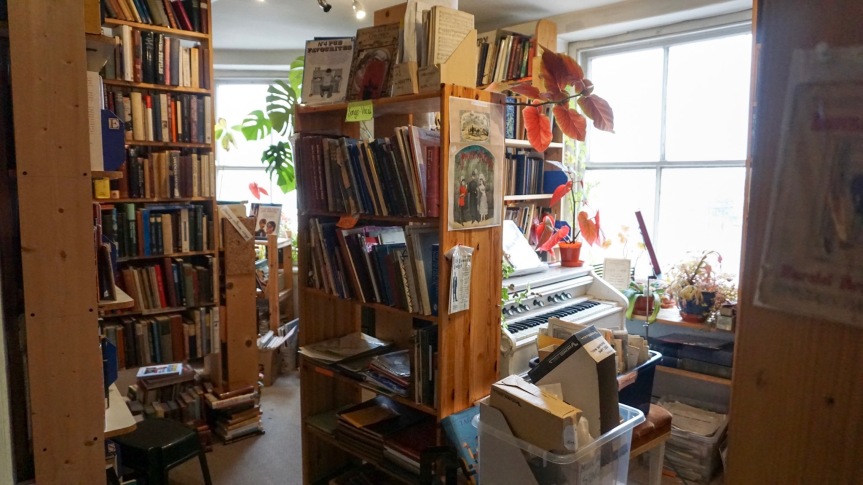 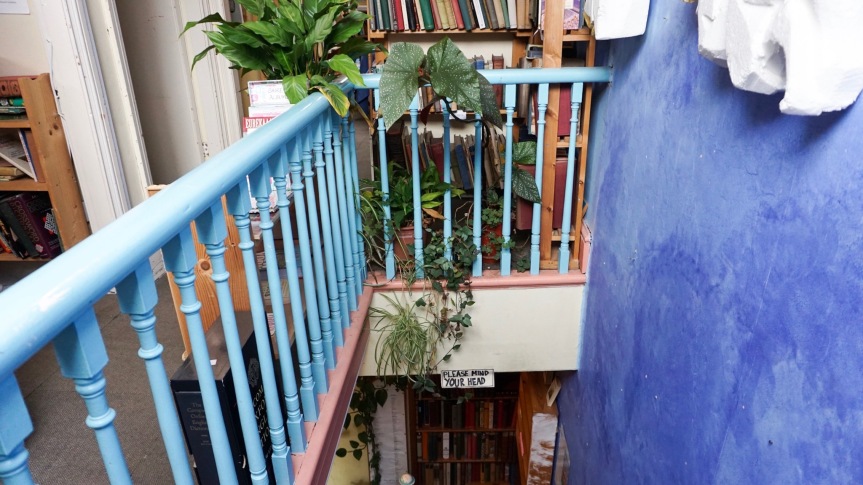 To be honest, we weren’t all that upset about the hotel. It wasn’t overly expensive and it was only one night. Plus, we never actually planned to come to Buxton in the first place. It was just a stop-over on our way to Monsel Head. However, I feel a bit bad for the people who come here expecting a luxury experience based on the online description and photos. We chose to make the best of it. The lobby bar seemed to be a very popular place for the locals to bring their dates and we had a fabulous time sipping wine and evesdropping on awkward first-date conversations. 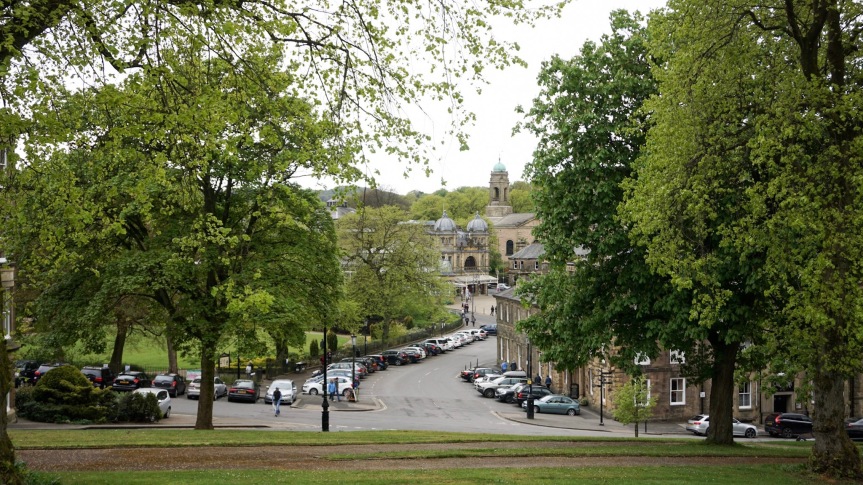 In keeping with the theme of places we wouldn’t necessarily recommend, we decided to try out a place called Lonestar for dinner. They specialize in, you guessed it, Tex-Mex.

The interior looked like a modern coffee shop but was decorated with posters from old western films. Most of the patrons were groups of girls dressed up and having dinner before a night out. We expected the food to be awful. In reality, it was odd, definitely not authentic Tex-Mex, but tasted just fine. There was a salad (complete with cucumbers and carrot) inexplicably placed on top of the nachos. The tortillas were pressed into a boat shape and the guacamole was obviously from a squeeze pack. We asked for everything to be made as spicy as possible but didn’t break a sweat while eating. The taco meat was like a mild chili and the fajitas were made with stew meat instead of skirt steak. However inauthentic it was, this place was still incredibly popular. The locals absolutely loved it. There were so many dinner reservations that we could only get a table for 45 mins. 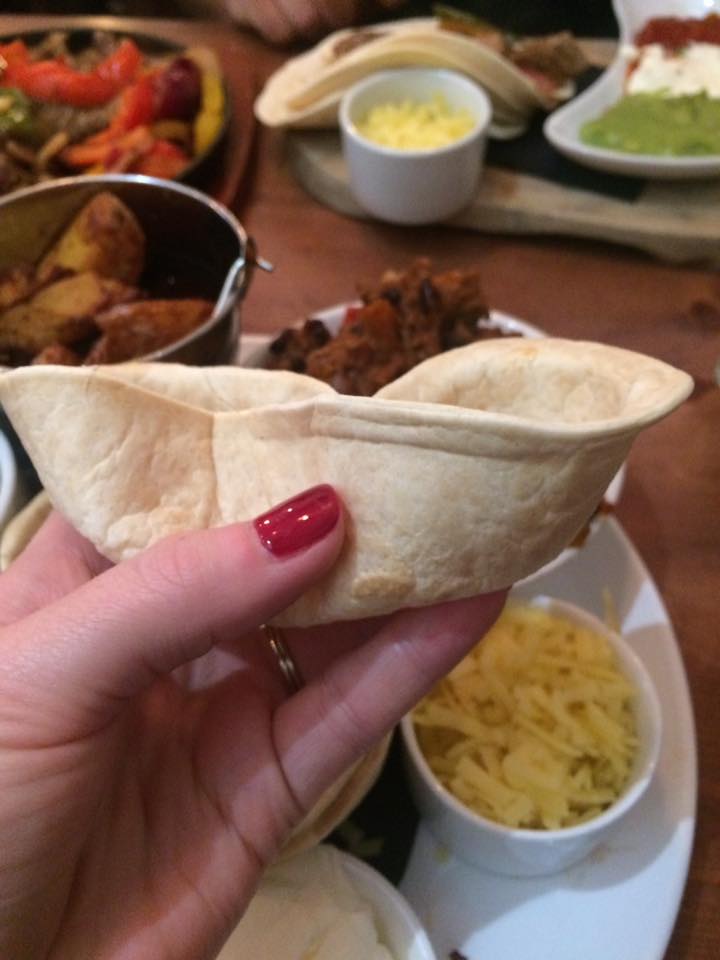 I would have been shocked if they had really nailed Tex-Mex cuisine (even nearby states don’t get it quite right) but I appreciated the effort and was glad to see the English enjoying some of my home-state favorites. Even if the dishes were shockingly bland for my palette, they were cooked well and were probably perfectly seasoned for the locals.

Tomorrow we’re driving to our final destination on this trip — Monsal Head. We’re looking forward to the lovely views and a relaxing stay. 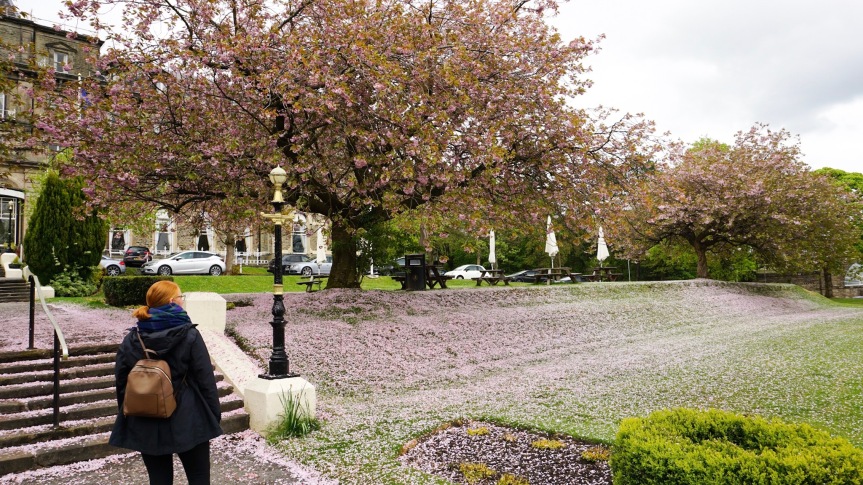 One thought on “When Old Luxury Hotels Fall Apart”