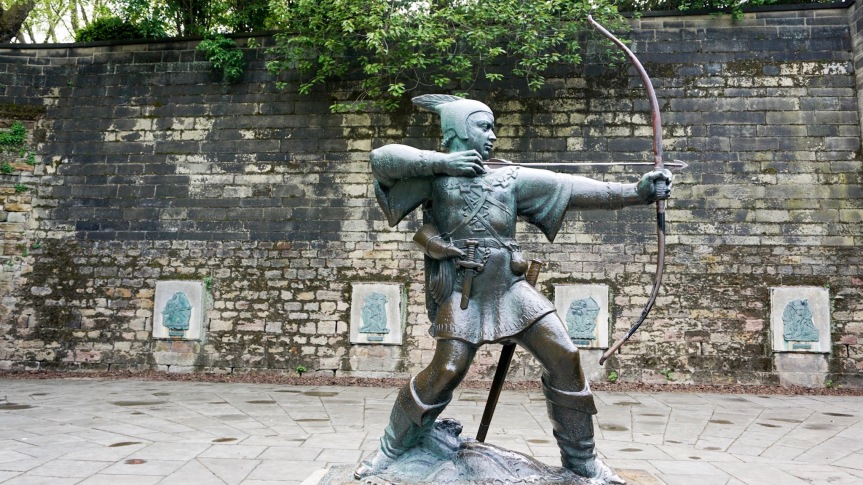 The drive to Nottingham from Blenheim Palace was at least an hour longer than it should have been. Traffic was terrible. There was construction and back-to-back cars on the motorway. Not the most romantic part of the road trip. Brandon’s back was getting sore from sitting in our tiny rental car and his left ankle was getting stiff from pressing down the clutch.

When we finally pulled into Nottingham our first impression was not good. This place was pretty grungy. No offense to my Portland friends, but this place was like the Portland of England. Dirtier than we expected but also much bigger. This was actually a good-sized city, not a village like the places we had been staying previously.

Our hotel wasn’t all that romantic either. It was a very basic but modern chain called Roomzzzz. Seriously? Of all the ideas that must have up during that corporate meeting and “Roomzzz” was the winner?

But the whole place would quickly grow on us.

The hotel wasn’t really that bad. It just had a stupid name. They had an espresso machine downstairs, a parking garage, a kitchenette in every room, free laundry, as well as sound-proofing and blackout curtains. Did I mention this was also the cheapest place we have stayed yet? Not bad at all.

My only real complaint was the square toilet seat. They were clearly going for the modern Scandinavian aesthetic (the whole place appeared to be furnished by Ikea), but honestly, who installs a square toilet seat? Human butts are round not square.

After dropping our bags in the room we took off to go find a place that had been recommended to us by a couple we met eating breakfast at Buckland Manor. They told us we absolutely had to have a pint at the Ye Olde Trip to Jerusalem Inn, established in 1189 and supposedly the oldest pub in England. The pub got its name because it was a gathering place for crusaders about to make their journey to fight for the Holy Land in Jerusalem. One last pint before you go, I suppose!

The pub is built into the side of the castle wall. The castle itself no longer exists — it was knocked down during the English Civil War. 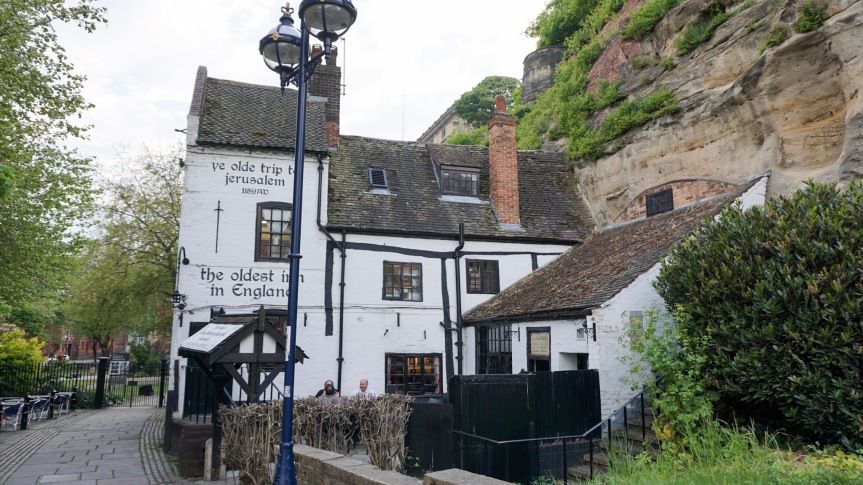 My original plan while walking to the pub was that we would have a pint and grab dinner. Two pints in and we still hadn’t ordered dinner but we were having a great time!

This was simply one of the most unusual bars I had ever been in. There were little nooks everywhere, carved right into the rock, and the vibe was just so perfect. 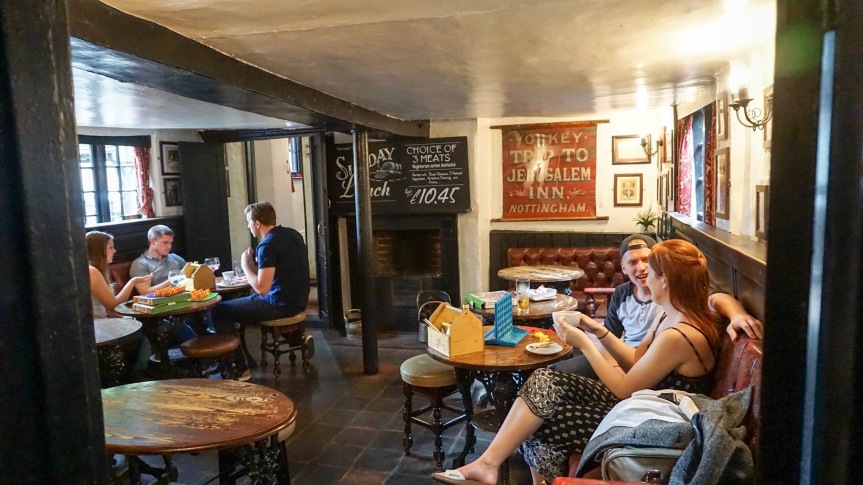 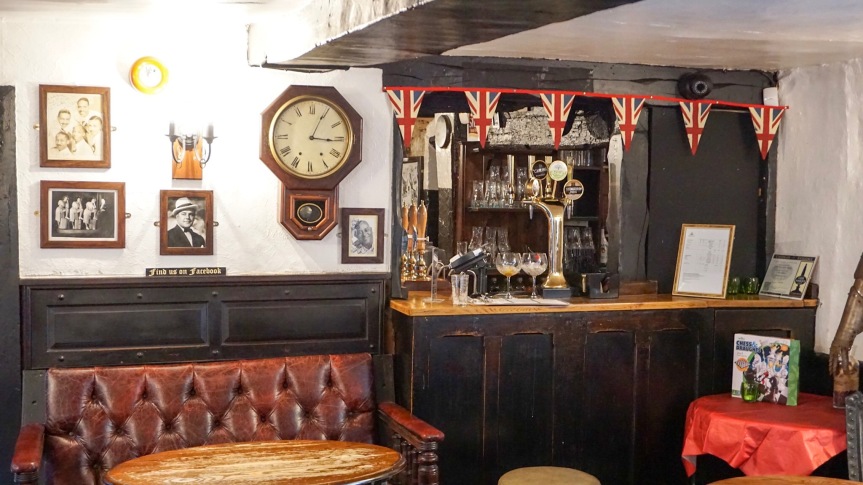 Funny thing is, while getting advice from friends about where to go on our UK road trip, Nottingham came up numerous times but the story was always the same — “We went to this random bar, met some random people, and had an awesome time!” There is just something about this town that leads travelers to make friends with strangers in bars. And here we were, sitting in a bar, having a great time, with absolutely no other plans.

While I was outside smoking a cigarette (I know. I know — a terrible habit that I’ve spent years trying to give up.) Brandon started chatting with the two guys sitting at the table next to us. Martin and Andy were Nottingham locals and the Jerusalem Pub was one of their favorite local bars. It was also only a short walk from Andy’s house.

They were both delightful and we had a great time comparing notes on the US vs. the UK. Our pints turned into scotch and around 10pm we realized that we had never ordered dinner! Knowing from past experiences that we had better eat something, Brandon ordered the steak burger and I ordered the macaroni and cheese. We devoured both, but as we had both been drinking scotch, who knows if it was actually any good.

Martin and Andy — If either of you read this, we had so much fun hanging out with you two. Thank you for a marvelous time. If you ever find yourselves in Texas please get in touch. We’d love to buy you a pint of local Texas beer, which will be served ice-cold, not cellar temperature. 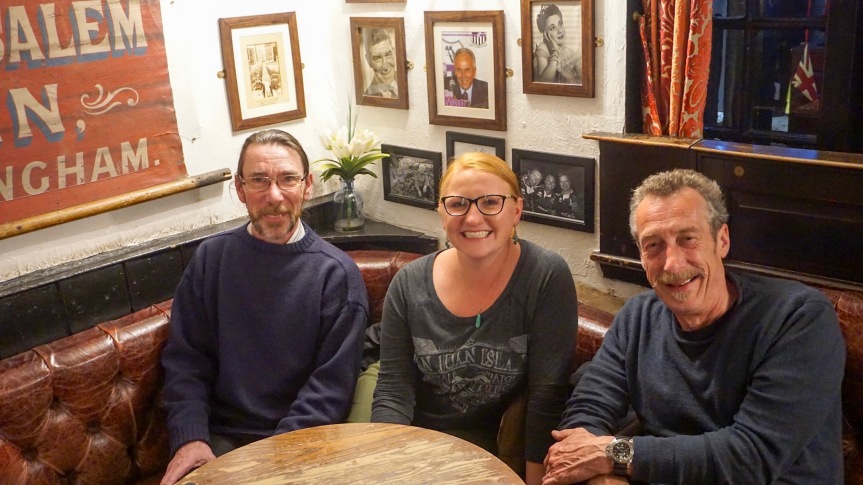 This pub is both a tourist attraction and a local hangout. And we definitely were not the drunkest in the place. That award goes to the jolly older gentleman near the bar that introduced himself to me a total of four times during the span of a few minutes.

Martin and Andy explained that they liked this pub because they had a good selection of real ale. Real ale is a type of British beer that is very fresh and brewed in a traditional style. It is always brewed locally because it doesn’t keep long enough to transport elsewhere. Here at the Jerusalem Pub, all the ale is stored in kegs kept in the caves below the pub. There is actually an entire system of caves under the city. They were previously used for transportation to and from the castle as well as for cold storage for beer and food. The caves naturally keep the beer at the perfect temperature. It is pumped directly from the caves up into the pub pint-by-pint.

The Jerusalem Pub was also surprisingly cheap. We had many pints, a couple of rounds of McCallan scotch, plus dinner, and somehow our bill was still under £80.

By some amazing stroke of luck, we only made one wrong turn when we finally wandered back to our hotel around 1am.

Two weeks into our road trip, in full-tourist mode every day, plus staying up the night before drinking scotch, meant that we were due for a snooze-in. And we were at the perfect hotel for that. Our room was sound-proofed (mostly) and had complete blackout curtains. We stayed in bed until nearly noon. Once we finally got up and showered, we spent an hour or two booking and planning the rest of our trip, mostly based on the suggestions of Martin and Andy. It was nice to finally be finished hunting for our next nights stay.

We decided to walk back to the Jerusalem Pub for a very late lunch. We thought, why mess with a good thing. We had clearly already found the best pub in the city and we had probably been too drunk the night before to tell whether the food was any good. Brandon ordered the same thing — prime steak burger topped with jerk pulled-pork and fries topped with cheese mustard and pickles. I had the chicken sandwich with spicy slaw. Totally sober (other than the hair of the dog pints we were currently drinking) and the food was still delish.

After lunch we followed the street signs leading to the Nottingham Caves. We were hoping we could go on a tour and do something in Nottingham besides enjoy the local pub.

Unfortunately, the signs just led us to a shopping district and it had started pouring down rain. We popped into an All Bar One to escape the rain. We remembered from our time in Bath that this chain restaurant made a decent mojito. Apparently the thing to do in Nottingham really is just drinking with strangers.

Giving up on touring the caves, we decided to go back to the room and catch up on our email and travel notes. We didn’t much feel like venturing back out for dinner so we stopped by the local Sainsbury Grocery to pick up some snacks for later. After all, our room came with a kitchenette! The store had a huge selection of single-serving prepared foods. I grabbed pot stickers and dim sum while Brandon went for the chicken sandwich with mustard. A three-pack of stella (yep, not six, here you can buy just three), a half-bottle of wine and we were good to go.

Back at the hotel we did all of our laundry (for free!) and I caught up on my travel journal while we listened to the club-goers nextdoor party until 3am (we had the window cracked).

Proof-reading this post made me realize that we sound like total lushes. I try to present an accurate portrayal of our expereinces and, to be honest, all we really did in Nottingham was have a jolly-good time at a famous pub. But we also made friends with some locals, which we had not yet done on this trip, and making friends with locals is always my favorite part of traveling. You can learn so much about a new place over drinks with new friends.

In conclusion, I highly recommend visiting Nottingham. But be warned, this is a party-town — no one leaves without a hangover as a souvenier. 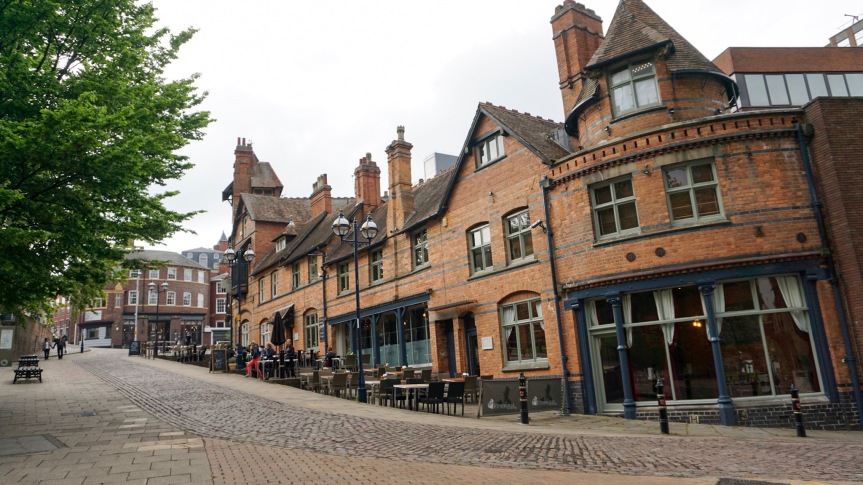 One thought on “Nottingham: Home of Robin Hood and Our New Favorite Pub”