Ainsworth State Park is a small park nestled in the Columbia Gorge, less than an hour outside of Portland. There is a small loop of RV sites and a small loop of tent sites. The sites themselves are also small. We were closer to our neighbors than we have been anywhere else. We were also next to a highway and a train track.  The trains didn’t blow their horns but they did come by in the night. I imagine the Parks Department was trying to fit as many sites as they could into the available area, with a mountain to the south and a river to the north, with waterfalls on either side. On the plus side, the park offers full hookup and is surrounded by beautiful trails to giant waterfalls. We are also very close to Hood River, one of our favorite towns in Oregon.

The Columbia Gorge is famous for lots of things, on of which is windsurfing. The Gorge formed by the Columbia River creates a sort of wind tunnel that makes for incredible wind surfing. Or so I’ve heard. We haven’t actually tried it. I’m guessing the water is still pretty chilly. We came here because we knew it was beautiful, close to home, and actually had a spot available at the last minute. Yay!

We arrived on Friday night around 7:30 pm. Brandon drove the Alpha while I followed in my car with Rudy. We decided to take my car so that we could drive the Historic Columbia River Highway on Saturday. We couldn’t take the Jeep because it was still in the shop having the A/C fixed.

Set-up was pretty quick. We’re getting much more efficient at hooking up water, leveling, etc. We did have a few issues though.

First, our automatic step wouldn’t come out. This step has been touchy since the beginning. It only works when it really wants to. The system is set up so that the step comes out when you open the door and retracts when you close the door. If you want the step to stay out you just flip a switch by the door when the step is in the out position. Since our step only sometimes works, we alway make sure to flip the switch when it pops out. On this trip the step decided it didn’t want to work until Saturday. On Friday we just made do with a short stool.

Second, the propane would not turn on. This is another ongoing problem we intend to fix soon. The propane valve does not always work which keeps us from using any of the propane systems, including the stove, oven, and hot water. Luckily, we were planning to grill burgers on our mini-Weber grill so this wasn’t a big imposition. Plus, neither of us had to feel bad about not doing dishes after dinner because there wasn’t any hot water anyway. We were both exausted from work and went to bed shortly after dinner.

As a side note, Brandon made these awesome Alpha 1 coasters at work. I’m thinking we need a matching decal for the RV. 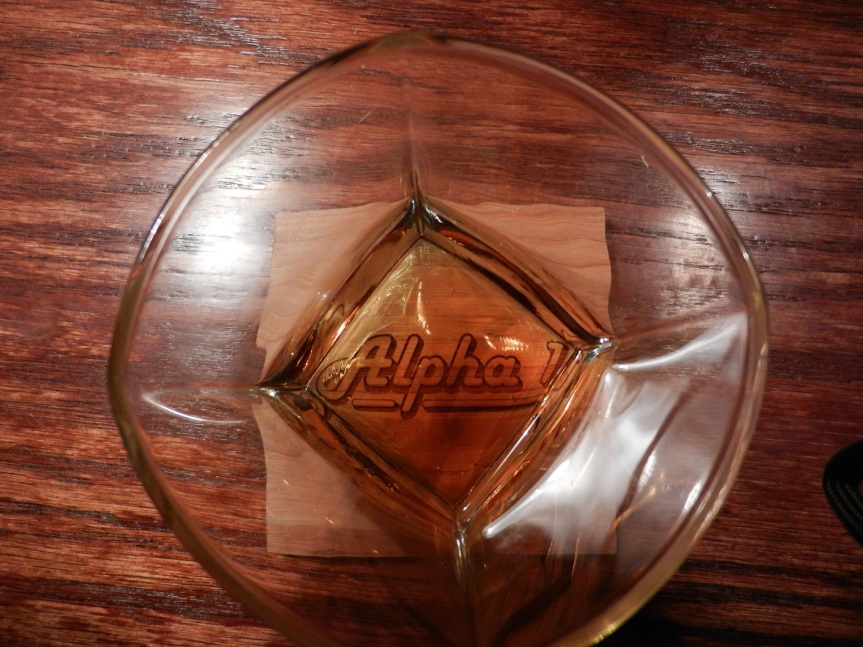 The weather on Saturday was nearly perfect. It was about 80 degrees at the warmest part of the day and bright and sunny. My only complaint was a bit of haziness that persisted until around 1pm. I feel a bit guilty for our fabulous weather when I think about my friends and family in Texas right now. It’s been raining so much there that commuting to work by canoe is becoming a viable alternative.

After a lazy morning we loaded Rudy into the car to go drive the Historic Columbia River Highway. Brandon pointed out to me that I could just lay down the backseat of my hatchback and put Rudy’s sheet on top of the seat backs. This way he has more space to stretch out. Rudy has just been riding in the backseat of my car for years. He instantly loved this new set up. I can’t believe I didn’t do this sooner. Hopefully Rudy will forgive me. 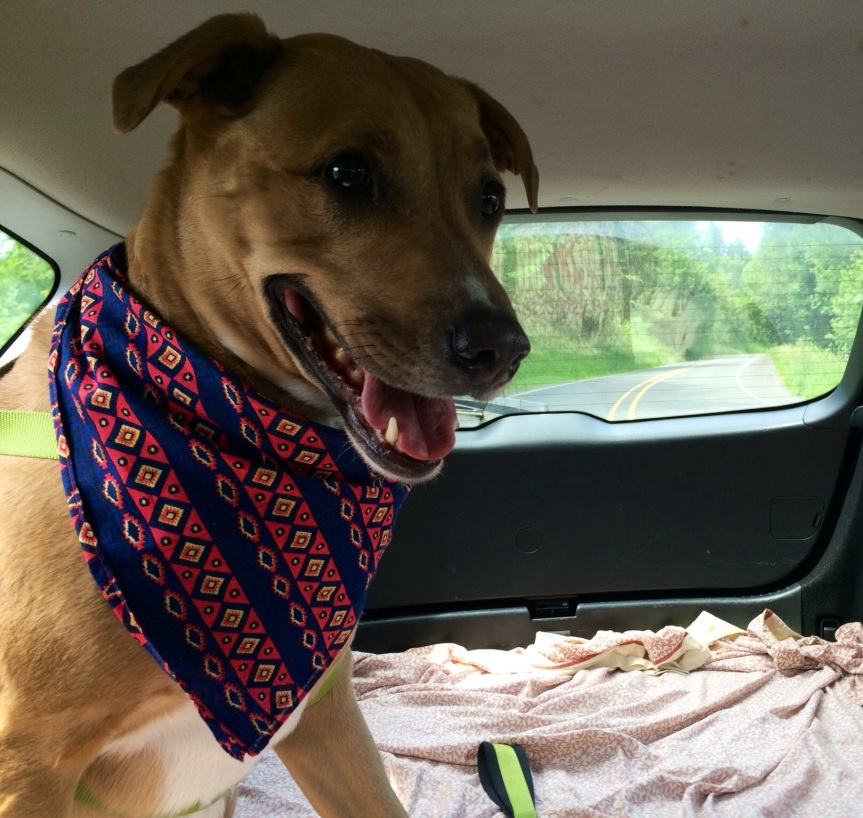 The 75 mile long historic highway was built between 1913 and 1922 as the Model T Ford was bringing car travel to the average American. The highway was intended as both a scenic drive and a thouroghfare between the towns along the Columbia Gorge and Portland. Modern highway 84 replaced the historic highway during the 1950’s but most of the original road remains and is maintained by the Department of Tranportation as a tourist destination. We spend the morning driving a 20 mile section of the highway that runs from Ainsworth State Park almost all the way Troutdale, just outside of Portland.
I was so overwhelmed by this string of classic cars that it took me a moment to realize I should grab my camera. This video shows just a fraction of the cars that drove past us.

The Vista House at Crown Point was designed and built by the same group of men that designed and built the historic highway. The circular building was intended to be a rest stop for travelers along the highway. It now contains a gift shop and some educational materials but originally housed only a bathroom and water fountain. The Vista House is basically a really fancy public restroom. But the view is fantastic and it’s worth a stop whether or not you need to use the facilities. 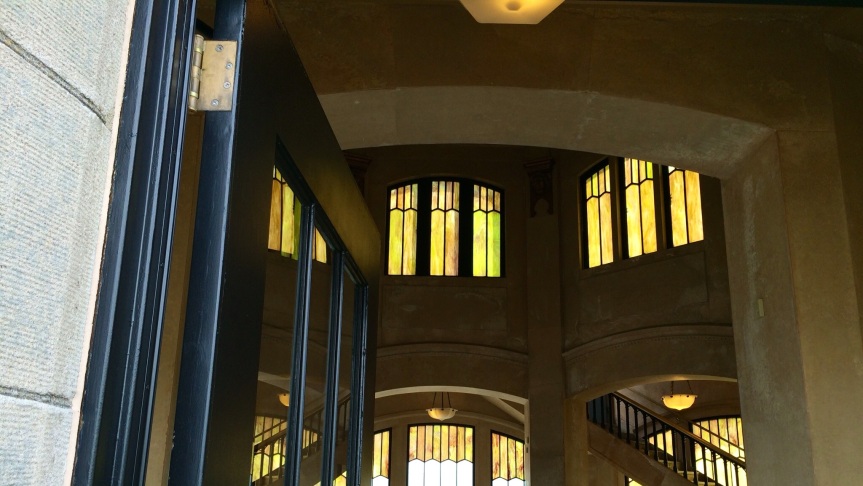 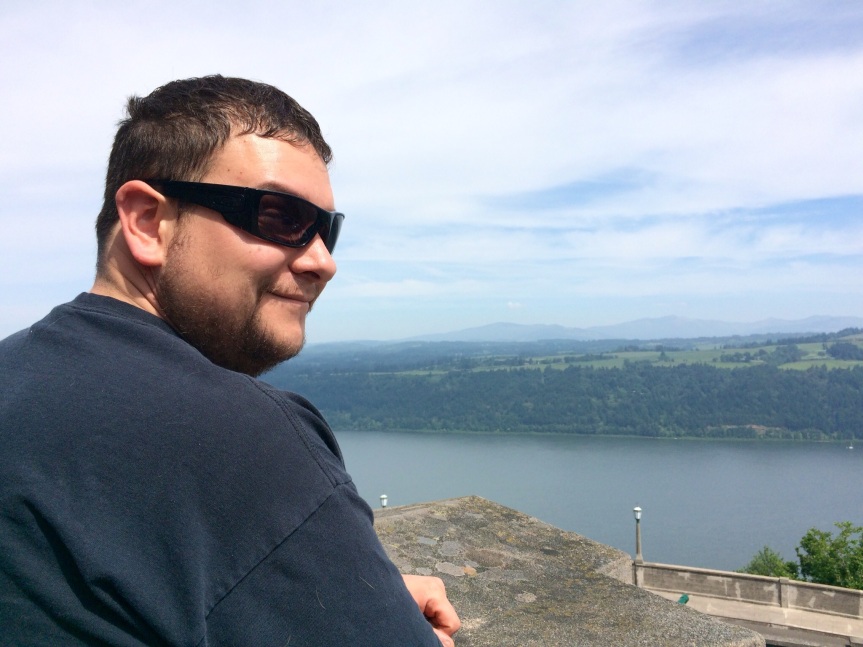 The drive along the historic highway is punctuated by spectacular waterfalls. The tallest and most famous is Multnomah Falls.

After our lovely drive we returned to camp to make sandwiches for lunch. After lunch we rode bikes around camp for a bit. We just recently bought bicycles and are getting used to riding again. Neither of us had ridden bikes since we were kids!

In the afternoon we set out on one of the many nearby trail towards the waterfalls. We were hiking to Pony Tail Falls. This was supposed to be a short hike, which was important because all of the trails here go up and down the side of the mountain, making a couple miles feel much more strenuous than usual. I wanted to see Pony Tail Falls becuase I had read that the trail actually went behind the waterfall. It did and it was spectacular. 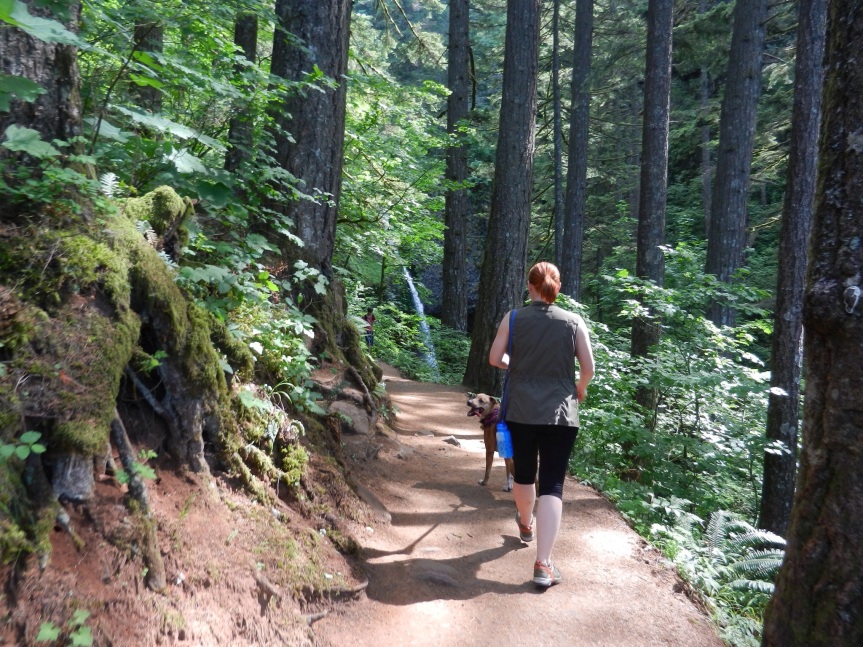 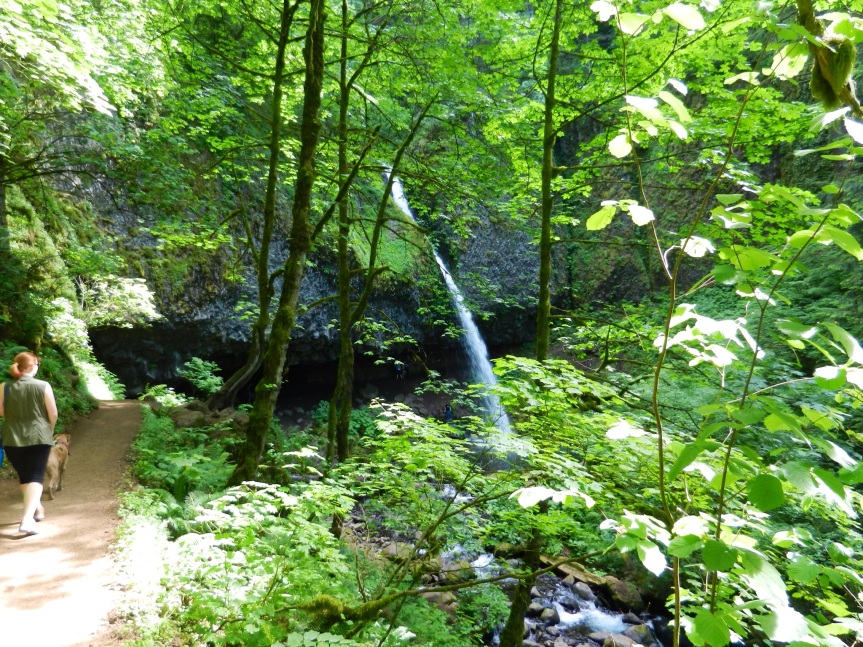 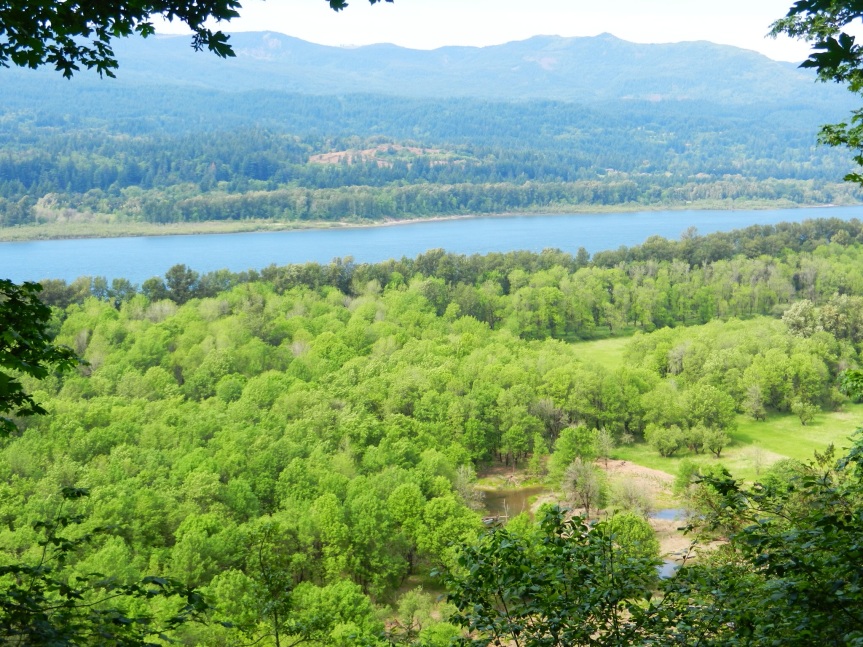 2 thoughts on “The Columbia Gorge”